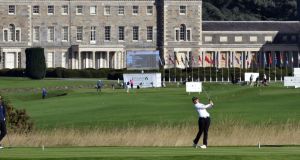 Annabel Wilson tees off at the seventh during the first round of the 2018 World Amateur Team Championship (Esprito Santo Trophy) at Carton House. Photo: Pat Cashman

Here we are tramping through knee high grass to the right of the 13th fairway. The least-stressed person is the girl with the studs in her left ear, the square glasses and a pigtail tied with a green ribbon, the girl whose ball the thin gallery are looking for.

Annabel Wilson is 17-years-old. Out among the bunkers of the Montgomerie Course and the beech trees of the O’Meara Course at Carton House is 16-year-old Mohan Du and 15-year-old Ruoning Yin from China.

Beatriz Arenas of Guatemala is also among them. This is no junior event. It is the World Amateur Team Championships and Ms Beatriz is 70-years-old.

Just 50 yards away from Wilson’s buried drive is the ball of the American world number one Jennifer Kupcho. Sitting pretty, middle of the fairway. She is the heir apparent to Leona Maguire, now launched into the professional ranks.

Kupcho will collect the McCormack medal at the gala dinner in Maynooth University on Saturday as the world’s best amateur player with the name Maguire listed twice underneath.

Wilson does not know it but Du will shoot a six under par 67 on the O’Meara course to Wilson’s one under 71 on the Montgomerie strip on the first day of the Espirito Santo Trophy, a golfing behemoth of 57 competing national teams.

Andy, originally from The Wirrel in Liverpool and father of Wilson, first took his daughter golfing at Silverwood, a public course in Craigavon.

“I’m going to take an unplayable, “ shouts Wilson from the 13th rough across to Kupcho after USA team captain Stasia Collins finds the Irish girl’s ball. The world number one nods.

The opening round of the four day event is a sunny, breezy day. The par fours into wind are long and barely makeable in two, the cross winds capricious and needing to be played. Or as Wilson found on a wavering day off the tee, it will play you.

On the 14th and blowing into her face Kupcho will fly her tee shot beyond the fairway bunkers. On the green she will raise her arms in faux celebration when a putt finally drops. There’s a player who gives herself looks.

“When you are ranked that high, that’s pressure,” says team captain Collins of the world number one. Her girl will finish the day tied-eighth at two under alongside Ireland’s Olivia Mehaffy, who also shot and opening 70 with Wilson tied-13th one shot back.

“We were playing the tougher course to start. First off playing with the Republic of Korea and the US is always nice. It’s good to test our game against those,” says Irish team captain Danielle McVeigh.

Ireland’s third player on the team, Paula Grant finished her first round two over with the best two scores, coming from Mehaffey and Wilson, putting Ireland in tied-fourth, two places above the USA with Japan leading and the People’s Republic of China in second. Germany, Republic of Korea and Austria are tied-third with Ireland and Australia in sixth place.

For Wilson it was a day to see close up what it takes to become the number one amateur in the world. Although at 17 and a bronze medal winner in this event from two years ago with Ireland, her eyes have been opened. It’s not certain she needs to see very much.

“I wasn’t sure she was one (in the world),” said the teenager of her American partner Kupcho, celebrating a charming teenage self consumption. “No...she was really nice...I did know she was the top three in the world.”

On day one of feeling out the field on Montgomerie and day two of doing the same on O’Meara, the Irish mood was more swinging up than flat or down.

“My iron play today was very solid. I gave myself a lot of chances,” added the Lurgan teenager. “Off the tee it was playing with what I got. Just trying to poke them on the fairway because some of them were wild.”

Thursday on O’Meara and patience may play its part. More birdies were coming in from the shorter course. The players had more wedges in their hands. The scores were lower.

The feeling was not to rush headlong in. Play the right shots, don’t force things, don’t expect the course to give handouts and don’t tell Annabel.

“More wedge play shots tomorrow so...plenty of birdies,” declares the schoolgirl with disarming cheer and a few wry smiles from her team. Dropping it like that you just got to love her.

Championship standings after round one

Round one individual scores (complete)