Rickie Fowler tied for the halfway lead in Phoenix Open 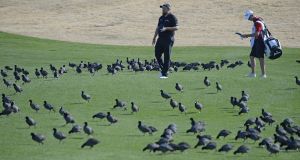 Shane Lowry during his second round in Arizona. Photograph: Robert Laberge/Getty

Rickie Fowler took a step towards Phoenix Open redemption when he earned a share of the halfway lead with fellow American Bryson DeChambeau in Arizona on Friday.

Fowler and DeChambeau both carded five-under 66s at TPC Scottsdale for 10-under-par 132 totals, one stroke clear of compatriots Daniel Berger and Chez Reavie.

Eighteen players are bunched within three shots of the leaders, including Phil Mickelson and Jon Rahm, who are both on seven-under.

However, Hideki Matsuyama’s hopes of winning the tournament for a third consecutive year evaporated when the Japanese world number five pulled out before hitting a shot, citing a left thumb and wrist injury. He had shot a two-under 69 on Thursday.

Two years ago, Matsuyama beat Fowler in a playoff after the American plonked his tee shot into a water hazard at the fourth extra hole.

Meanwhile Shane Lowry scraped inside the level par cut mark by a stroke after failing to catch fire in the Arizona desert, as he shot a level par second round of 71.

After Thursday’s opening effort of 70 - which saw him flirt with a hole in one in front of the baying crowds of the 16th - Friday’s round was much less eventful.

Indeed, Lowry could only muster two birdies on day two, before giving them back to leave himself on one under par for the tournament, nine strokes off the tournament lead and in a share of 63rd place.

Despite his status as a fan favourite, and a healthy world ranking of seventh, Fowler knows he has let too many tournaments slip away, with 12 career runner-up finishes on the PGA Tour to go with his four official victories.

He looked set to claim the solo lead on Friday until he overcooked his chip shot at the par-four 17th for a soft bogey.

“Was in good position to make birdie there, a little unfortunate to make bogey, (but) other than that solid day, kept moving in the right direction,” Fowler told the Golf Channel after his 11th consecutive round of 70 or better at the venue.

“We’re in a good spot going into the weekend. This is a place we know we can continue to play well. I’m comfortable on this course.

“We’ll piece together the nines at some point. Yesterday we started on the back and got off to a decent start there and then cooled down a little on the front. Today played the front nine well.”

DeChambeau, a physics major who applies his understanding of the science to his swing, rifled his approach shot to inside a foot to birdie the last and join Fowler at the top of the leaderboard.

American Robert Garrigus hit the shot of the day at the driveable par-four 17th, almost making a rare albatross.

His tee shot landed short of the green and the ball bounded forward and clattered against the pin, but somehow did not drop in, settling a couple of inches way. He settled for an eagle and finished the day eight strokes behind.

World number three Jordan Spieth missed the cut by one shot, the American finishing on even-par 142 to suffer his first weekend off since last May.