Rory McIlroy striving for intensity as he goes through the motions 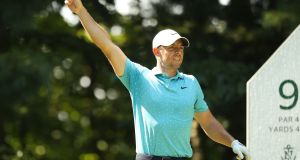 Rory McIlroy has returned to Florida for two days ahead of this week’s BMW Championship in Chicago. Photograph: Maddie Meyer/Getty

If only there were a quick fix, which Rory McIlroy, as one week has rolled into another of late, has discovered doesn’t truly exist: the 31-year-old Northern Irishman – who has fallen from first to second to third and now fourth in the world rankings in little over a month – will move on to this week’s BMW Championship at Olympia Fields outside Chicago unsure of what game he will bring.

Indeed, a somewhat exasperated McIlroy decided to return home from Boston to Florida for a two-day break before flying on to Chicago for the penultimate tournament of the FedEx Cup playoffs. “I’m going to try a couple of drivers at home,” he explained, before getting to Chicago for a new course on his list, “and see if I can figure it out.”

McIlroy flew his coach Michael Bannon over to Florida ahead of the Memorial tournament last month but the two have been using video calls since then in an effort to resolve issues. “We’re doing videos and stuff, but it’s hard when you can’t see the ball flight,” admitted McIlroy, who suggested the untypical waywardness off the tee was a primary key in his poor run. “I haven’t driven the ball the way I usually do, which puts me out of position.”

Without a top-10 since the PGA Tour’s resumption at Colonial in early July, McIlroy has gone 32nd-41st-11th-32nd-47th-33rd-65th in that run of tournaments without ever getting into the business end of affairs. “I’m not getting myself into positions to contend. It’s hard. Like, I’ll go a few holes and hit some good shots and then, one hole, I’ll hit one way right, [or] way left; and I’m sort of like, ‘where did that come from?’ And that affects the shots that you hit from there. It’s just been a bit of a struggle.”

McIlroy, the defending FedEx Cup champion, has two tournaments left to transform things. This week’s BMW Championship at Olympia Fields, and then a favoured hunting ground at East Lake in Atlanta for the Tour Championship. Although his poor performance at Boston saw him drop from eighth to 12th in the standings, he is still assured of making it to Atlanta.

The trick, though, is to find intensity in his game. As he conceded, “this is going to sound really bad, but I feel like the last few weeks, I’ve just been going through the motions. I want to get an intensity and some sort of fire, but I just haven’t been able to. That’s partly to do with the atmosphere [of no crowds] and partly to do with how I’m playing. I’m not inspiring myself and I’m trying to get inspiration from outside sources to get something going.”

McIlroy’s schedule going forward will include the final two FedEx Cup tournaments before attempting to recalibrate in time for the US Open at Winged Foot next month.

Just five weeks ago, McIlroy was sitting atop the world rankings. But it has been like a game of musical chairs in recent weeks, with Dustin Johnson’s runaway win in the Northern Trust returning the American to the number one spot in replacing Spain’s Jon Rahm. Justin Thomas has also had a stint at the top in that five-week period.

“It’s something that I’m very proud of is to be number one in the world, and I’d like to stay there for a little while. Obviously it’s been jumping around a bunch here the last few months, but you know, the last time I was number one, I think I stayed there for quite some time, and that’s another goal of mine is just to see how long I can stay at number one,” said Johnson of his intent to dominate going forward.