Leona Maguire sits seven off the lead at Scottish Open 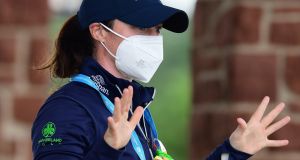 The first challenge for any professional golfer in any given week on the LPGA Tour is to survive the midway cut, and then to kick on! And that is precisely what Leona Maguire – demonstrating no evidence of any tournament rust despite a six-month break since her last outing on tour – managed in producing successive rounds of 72 for a midway total of two-over-par 144 in the Aberdeen Standard Investment Scottish Open at The Renaissance Club in North Berwick.

The 25-year-old Co Cavan golfer, who answered an early morning alarm call to resume play at 6.30am of her incomplete first round which fell victim to fading light on Thursday night, finished those four holes with a birdie on the 18th to sign for a 72 with only a short break before commencing her second round.

Maguire, in her rookie season on the LPGA Tour, last played on the circuit at the Australian Open back in February but had prepared for her return by practicing on her home course at Slieve Russell and also by competing in one-day events against the men at Seapoint and The K Club while also prepping on Scottish links in advance of back-to-back tournaments that include the Scottish Open and next week’s AIG British Open at Royal Troon.

For her second round, Maguire, a former world amateur number one who graduated to the LPGA Tour off the Symetra Tour last year, produced a polished round that included two birdies – at the fifth and seventh – and three bogeys, on the second, 11th and 15th holes.

Maguire’s 36-holes total of 144 ensure she comfortably survived the midway cut, although it was one of her playing partners, two-time Major champion Stacy Lewis, who made one of the biggest moves of the second round with a five-under-par 65 to reach the midpoint on five under for the tournament, tied for the lead with Azahara Munoz of Spain.

Meanwhile, Golf Ireland is set to dispurse some €615,000 to clubs on the island (capped at a maximum of €10,000) to support clubs affected by the Covid-19 pandemic. One key condition for clubs receiving funding is that they sign up to the Women in Golf Charter within three months of receiving funding and commit to achieving a number of gold, silver and bronze levels in the areas of visibility, governance, participation, culture and gender balance within a set timeframe. Funding applications will close on September 4th.

Collated second round scores to follow at close of play...