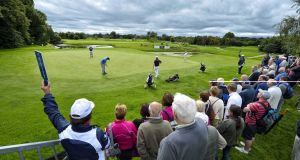 Galgorm Castle is being lined up as an alternative host venue for this year’s Irish Open with a potential date in late September. File photograph: Inpho

A lifeline is set to be provided to the Dubai Duty Free Irish Open for this year, with Galgorm Castle in Co Antrim - which is already scheduled to play host to a Challenge Tour event - set to step in as the host venue filling the September 24th-27th vacancy on the PGA European Tour’s schedule.

Part of the blue chip Rolex Series on the European Tour, the Irish Open was originally due to take place at Mount Juliet in May but was postponed due to the Covid-19 pandemic. Hopes that the Co Kilkenny resort could stage the tournament in an alternative date have been complicated by government requirements for incoming travellers to undergo a two-week quarantine, which would have ruled out any players travelling over from the previous week’s US Open at Winged Foot in New York.

However, those restrictions are not in place in the North, which has led to the strong likelihood that Galgorm Castle near Ballymena - which is already due to host the Northern Open, a tournament on the Challenge Tour, in early September - will double up as the host venue for the Irish Open.

A spokesperson for the European Tour said: “An announcement about the 2020 Dubai Duty Free Irish Open will be made in due course.”

When the Irish Open was postponed earlier this year, the European Tour’s chief executive Keith Pelley insisted the tournament was “still absolutely critical and is very much part of our plans.” However, the tournament wasn’t included as part of the tour’s revised scheduled, which has centred mainly on the UK Swing of events currently under way, and didn’t feature on the late-season swing that takes in the Scottish Open and the BMW PGA at Wentworth.

Now, it would seem set to be placed onto the schedule in the week after the US Open at Winged Foot, where a number of Irish players - among them Rory McIlroy, Shane Lowry and Graeme McDowell - will be in action. Lowry and McDowell, who will act as the tournament host for this year’s event and again in 2021, will make the transatlantic trip back for the championship but McIlroy is expected to remain in the United States.

McIlroy said earlier this week he would expect to play no more than six events for the rest of the season (which would include the three FedEx Cup playoff tournaments, the US Open and the US Masters) and made no mention of returning to play any tournaments in Europe.

An Irish Open at Galgorm Castle would work on a number of important fronts. The course itself is tried and tested in a tournament environment - it has previously hosted the Northern Ireland Open on the Challenge - but, also, with a five-star hotel nearby, it can provide the bubble necessary for touring players to fulfill the protocols which are an essential part of tour life these days.

If and when the ongoing discussions are finalised, the tournament will be played behind-closed-doors, similar to what has happened on the PGA Tour stateside and also the European Tour since they rebooted.

The Irish Open was last held in Northern Ireland when Portstewart played host in 2017 where Spain’s Jon Rahm, the current world number one, won. Rahm, as it happens, is the defending champion having also won the tournament in Lahinch last year.