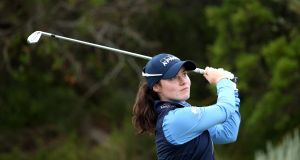 Leona Maguire will resume her first round on two over par.

Leona Maguire has discovered that patience is a virtue. And, after waiting some six months to make her return to the LPGA Tour since her last competitive outing, the Co Cavan golfer had to wait a little longer after morning fog delayed the start of the women’s Scottish Open at The Renaissance Club in North Berwick and eventually saw play suspended due to fading light.

As it happened, Maguire was one of those unable to complete their first rounds. Maguire - who hadn’t played since the Australian Open last February - only managed to complete 14 holes, at which stage she was in tied-48th on two-over-par, before the siren sounded at 8.35pm to halt the day’s play.

Maguire - who had prepared by playing some links golf in Scotland in recent weeks - suffered bogeys at the second, seventh and 11th holes, while her lone birdie came on the par five 10th hole.

Denmark’s Nicole Broch Larsen - the 2015 European Tour player of the year - remained unaffected by the fog delay, including closing birdies on the 17th and 18th holes for a four-under-par 67 that gave her a one stroke lead over a five-strong group on 68.

Larsen demonstrated no evidence of rust after her long lay-off, requiring only 26 putts in her round: “I played a couple of tournaments in Denmark and the key to my score was definitely my putting. I’ve also being playing at my home course from the white tees, which is a similar length to this week, if not longer than this set-up, so I feel like I have been used to making a lot of up-and-downs, which I managed to do here.”

The Dane took a one stroke lead over a quintet that included her compatriot Emily Pedersen, Germany’s Olivia Cowen, Spain’s Azahara Munoz and Americans Jennifer Song and Amy Olson.

American Danielle Kang, the world number two who won the opening two events on the LPGA Tour’s recent restart in Ohio, opened with a level-par 71 in her bid to complete a hat-trick of wins in successive weeks.

Irish Open 2020: Galgorm Castle hole-by-hole guide 06:00
Rugby Stats: Saracens superiority at scrum time key to victory over Leinster 06:00
Irish Open . . . Four to watch 06:00
Marty McGrath and Ederney hoping to bridge a long gap in Fermanagh 06:00
Sonia O’Sullivan: 20 years on and memories of that Sydney final flood back 06:00
Here is your handy guide to sport on television this week