Harding Park: The municipal course you can play for $50

About 65,000 rounds are played at the San Francisco layout every year 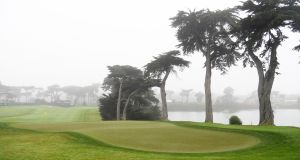 A general view of the 18th green at TPC Harding Park during a practice round prior to the 2020 US PGA Championship. Photograph: Harry How/Getty Images

Fewer than three weeks ago, TPC Harding Park, a city-owned golf course in San Francisco, was roamed by duffers of all abilities. Those were just another stretch of crowded days at the local muni.

About 65,000 rounds are played at Harding Park in a typical year, plus another 30,000 at the nine-hole course tucked inside the 18-hole layout, the city said. Some pay as little as about $50 a round, depending on residency and the day’s demand.

But this week, the world’s best golfers have descended on Harding Park for the US PGA Championship, the first men’s Major in this coronavirus-amended season.

It sounds like a magic trick: How could the same patch of grass and trees go from being so accessible to recreational golfers to so foreboding to the pros?

The transformative task fell largely to Kerry Haigh, chief championships officer for the PGA of America, and the local parks and recreation crews that maintain the course, even this week.

Their method made the most of time, imagination and geometry, all made trickier by Harding Park’s availability to its regulars through July 17th.

“Tee times every day from dawn to dusk make it challenging for anyone to grow grass and prepare a golf course in championship condition because of how difficult it is to even get onto the golf course and work in an efficient manner,” Haigh said. “You’ve got to keep clear of golfers that aren’t always hitting it straight all the time.”

Harding Park has held top PGA Tour events before, including the 2009 Presidents Cup, but this will be its first Major tournament. Compared to the few other American municipal courses in its elite class, like Bethpage Black on Long Island and Torrey Pines in San Diego, Harding Park feels comfortably unspectacular, like a familiar bar. That is its charm.

Phil Ginsburg, general manager of the city’s recreation and park department, recently came upon a newspaper story from the course’s opening day on July 18th, 1925. The account called it “the most pretentious golf course any municipality in the world can boast.”

Ginsburg laughed when he read it. Nearly a century later, Harding Park “may be the most unpretentious site ever to host a Major,” he said.

That reputation owes as much to its location as it does the course’s lack of meant-to-impress flourishes like those at cloaked country clubs elsewhere. Harding Park is an urban playground that sits next to San Francisco State University. One side is lined by dorms and apartment buildings across a busy boulevard, fenced by chain-link. There is no chateaux-style clubhouse, and amid the cart-pulling, bag-carrying golfers are joggers and dog walkers. You can take the Muni, San Francisco’s transit system, to get there.

But the course is blessed with a classic layout – tight fairways lined by majestic cypress trees, its front nine folded inside a back nine that unwinds alongside Lake Merced. It is all made unpredictable by San Francisco’s famous cool summer wind and fog. Temperatures this week are expected to be in the 50s and 60s (10-21 Celsius).

“If you’re a little persnickety about your golf climate, Harding’s not for you,” Ginsburg said.

It is Harding Park’s core traits – trees, bunkers and the lake – that Haigh accentuated to test the world’s best golfers. Harding Park will play longer this week at 7,251 yards, extended about 800 yards from the white tees familiar to locals. But lengthening a course is the easy part. Haigh said he spent most of his time calculating angles, trying to force golfers this weekend to use their mental protractors to conquer the course. Fairways were narrowed between thick rough and some were shifted to one side or the other to put more trees and bunkers in play.

“I’m a great believer that if you can make any golfer think and have to sort of strategise, then they enjoy – and we enjoy – the game a lot more,” Haigh said.

Haigh and Ginsburg’s city crews also took some counterintuitive measures. Locals might notice that the longer grass that slowed stray shots from rolling into many fairway bunkers is gone.

“With the design of the course, if you’re going to have bunkers and spend all this money on bunkers,” Haigh said, “why not have balls roll into them?”

The par-4 13th hole, for example, with 30 extra yards this tournament, has a fairway bunker and a bent cypress on the right, obstacles for golfers daring to cut the corner. The par-4 16th, a sharper dogleg to the right with water to the left, might be drivable for some, if they can trust their fade and hit it over or around trees.

“With the overhang of these cypress trees, there may be a couple lost balls here,” Tiger Woods said of the course he played as an amateur and where he won the 2005 WGC/American Express Championship. “Cut a corner and the ball hangs up there.”

Haigh said he does not alter courses with projected scores in mind. But the changes to the course – the length, the angles, the rough, the faster greens – probably add 10 strokes to Harding Park’s difficulty usually faced by locals. Scoring will be tighter, too, with the par set at 70 instead of the usual 72.

This year’s alterations faced unusual hurdles – mainly, Harding Park’s persistent use by golfers and the pandemic that shifted the Major championships calendar. The tournament was scheduled for May. The original plan was to spend four months building the tournament infrastructure – grandstands, television compounds and so on – and close the course to the public only for two weeks before the tournament.

But the onset of the coronavirus postponed the tournament to August. It also shut down the course to golfers – but not groundskeepers – from mid-March to early May. There was plenty of public play, though, when the course reopened in late June and through most of July. By then the PGA of America had announced that there would be no fans allowed at the tournament.

That altered all sorts of logistics. Grandstands were dismantled and hauled away. No longer would there be a need for on-course hospitality suites or most concessions and restrooms. There was no demand for parking and shuttles for tens of thousands of fans, no use for armies of volunteers and marshalls.

The massive tent erected for a planned merchandise store was converted to the players’ locker room. The planned locker room became the downscaled media centre. Fairways and greens are still lined by ropes, to keep workers, reporters and others from absent-mindedly veering into the action. But players will be able to amble from green to tee without a crush of fans.

During practice rounds early this week, sometimes the only sound greeting golfers was the snap of colourful trash bags hanging on stands around the course, fluttering in crisp ocean breezes. Gone is the public from the most public of championship golf courses. – New York Times