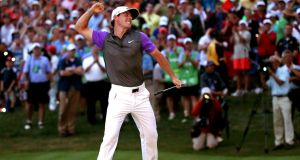 A three-month hiatus may prove to be more significant to Rory McIlroy than one that has stretched to six years. The latter is his wait for a fifth Major championship win, which will return as a key theme when the US PGA Championship begins in San Francisco on Thursday. During this year’s far more brief and enforced break, McIlroy spent time identifying specific targets.

“Because of all that’s happened, it has made me focus a little more on just these weeks that are coming up,” McIlroy says of the three Majors, the US PGA, US Open and Masters. “Everything was normal then we had this massive gap where I had time to think: ‘Okay, what are you looking forward to after this break?’ It’s a funny year, different circumstances, but I have three opportunities from now until November to add to my Major tally. Those were the three, even in quarantine, I was looking towards. Once the schedule was set it was those three events I was trying to get ready for.”

It seems ludicrous, given his talent and recent consistency, that 2014 in the darkness at Valhalla was the last time McIlroy lifted one of the sport’s famous trophies.

His career has hardly been in decline since what was a second Major win in a row. Even more curiously, there have not been umpteen Majors in which he has been front and centre in the closing stages.

McIlroy, who closed out a disappointing showing at the WGC-FedEx St Jude Invitational in Memphis with a three-under 67 to finish the week on one under, identifies the Masters and Open of 2018, plus the US Open last year, as half-chances. He rebuffs any notion this run is close to becoming psychologically problematic. Perspective has always been one of his most useful traits.

“I think if I hadn’t won a Major then it would be an irritation. Obviously it is coming up to six years . . . it’s funny, 2014 Valhalla was actually playing on the Golf Channel here the other night and looking back I was like: ‘Jeez, it doesn’t seem that long ago.’ But then you think about everything that’s happened since.

“It’s not as if I don’t know that I can do it. I’ve done it before. Maybe the challenges are a little different, maybe the people I have to go up against are different but being able to do it and doing it so emphatically with the first couple I won . . . it is in there.

“It’s not as if I don’t have the capability, especially coming off a season like the last one; PGA Tour player of the year, won four times, beat some of the best fields in golf. It’s not an irritation but of course you want to win the biggest events.”

McIlroy’s awareness extends to theories which fly around him. Many make him shake his head, such as the idea that more criticism about the past six years may spark him into unbeatable action. “That view of my psyche is skewed. It couldn’t be further from the truth. I don’t see it [criticism], I don’t read it, it doesn’t get to me. That has never been what it’s about. I have never tried to prove people wrong, I’ve always just tried to play my best.

“When you are young and starting out maybe you think a lot of yourself and are trying to show you are one of the best players in the world but I’ve been in this position a long time. I’ve had a lot of time at the top of the game. If you focus on yourself and control what you can, that’s the best way forward.

“Maybe it is coincidence that sometimes I’ve had criticism and played a really good tournament but I’m not going on to the course thinking about anyone other than myself. And that’s what I’ve always done. Golf is wonderful because it’s really the only sport where you can completely focus on yourself, the other people don’t matter.”

The 31-year-old has a more fundamental explanation for his absence from Major podiums. “Fast starts. If you look at my Major wins, I’ve been off to a fast start every time. I don’t want to put myself under a lot of pressure to do that but getting off to a strong start, shooting something in the 60s, is always going to give you a great platform to work from.”

McIlroy has fond memories of Harding Park in San Francisco. He triumphed in the 2015 WGC Match Play there, with Gary Woodland seen off 4&2 in the final. Disruption to the tournament meant McIlroy missed out on a trip to watch Floyd Mayweather fight Manny Pacquiao in Las Vegas. Harry Diamond, now McIlroy’s caddie, did make the fight, with Lee Westwood handed the spare ticket. Was McIlroy ever reimbursed? “No . . . but it’s fine, I made enough that week,” he says, laughing. “I was glad I didn’t go in the end, it wasn’t much of a fight.

“I remember getting to Harding Park that week, my game was feeling good, I’d won in Dubai and finished fourth at the Masters. I automatically liked the course, I thought it was fairer than Olympic Club across the way and felt it was a better fit for me because you have room off the tee and can hit driver a bit more.

“I remember a lot about that week, the matches I had. It’s nice going back to venues you’ve enjoyed and had success on, it gives you good energy. Some of the best players seem to have success on the same tracks; Tiger [Woods] has won half of his PGA Tour events on five courses. You are going to get places that just fit you better than others.”

McIlroy has been candid about the difficulties he has encountered at spectator-free events. It is easy, he says, to lose concentration. “I’m not used to it. It’s so different to what I’ve learned to do.” The adjustment is clearly harder for him than many others because of his large tournament following.

With the US Open joining the US PGA in announcing it will take place without fans, attention has turned towards Augusta. Whether or not the Masters would have the same appeal with the gates closed is subject to intense debate. “They might have to do it that way,” McIlroy says.

“I think if anyone can make it work with spectators, it is them. Georgia is a state that is maybe a little more open to having crowds and on the ‘getting back to normal a little quicker’ side of things, just like quite a few states in the south.

“But it’s up to Augusta National and the governor of Georgia. It’s not just about players when you bring fans back, it’s about keeping the community you are playing in safe. If you can’t guarantee you’ll do that, then it’s not worth it.

“I would prefer to play every tournament with fans. Sometimes I’ve struggled to keep focused when there isn’t a lot of noise. When you have crowds on both sides of the fairways, finding focus is very easy.”

McIlroy believes the idea of fresh attitudes post-pandemic and in a “different world” is far from cliche. During discussion on a rainy Florida morning, the world No 2 is inquisitive about coronavirus’s impact at home. He also has concerns about the knock-on impact of Covid-19. “The amount of time kids are having to spend inside [their homes] and on [computer] screens,” he says of his biggest fear.

“You are going to have a generation that have missed out on school but I’ve also been a big advocate for a while of digital minimalism and getting away from screens. I want people to enjoy how we grew up, playing football with mates. I worry about how kids develop socially and the burden that has been put on parents as they try to handle all this while trying to work.”

Soon, PGA Tour players will compete for a $15 million bounty at the end of the FedEx Cup playoff process. To some, that will feel offensive. To others, this merely demonstrates that funding at the top of sport will be unaffected by coronavirus.

“All these companies have marketing budgets,” McIlroy says. “They have hundreds of millions to spend and the revenue they create is in the hundreds of billions. I don’t see that big prize money in golf is tone deaf if the companies see value in it and are willing to spend that to get their brand on TV. We are just fortunate we are the ones playing for it.”

Digital minimalism is one consequence of McIlroy’s fervent reading. Yet it seems another pastime, travel, almost became a replacement for education; his blossoming career was such his school life was disrupted.

“You educate yourself, definitely, on how to interact with people. You learn about different cultures, that people have different values and beliefs but you can still find common ground. My travels educated me a lot. I am still not great at long division, mind you. I always reckoned so long as I could count to 70-ish . . .”

If McIlroy reaches another number, five, he will match the Major haul of Seve Ballesteros and sit within one of Nick Faldo. Discussion about Europe’s finest golfer of all time would suddenly be contemporaneous. And perhaps overdue. – Guardian