Different Strokes: Golf’s a numbers game but you need to know which ones 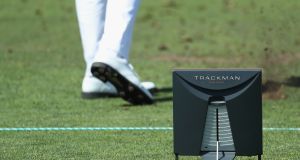 A trackman is seen as Justin Thomas plays a shot on the range during a practice round prior to the 2018 US Open at Shinnecock Hills Golf Club in Southampton, New York. Photograph: Rob Carr/Getty Images

Professional golfers rely heavily on numbers other than those that they pencil in on a scorecard. Swing speed, ball speed, spin rate, curve, carry, dissemination of shots, greens in regulation, putts per round, fairways hit and sand saves is by no means the comprehensive list of metrics but serves to illustrate a point that figures are crunched in search of incremental improvement.

These numerical yardsticks contrast sharply with the vast majority of club golfers who champion the abstract, the central tenets of which are denial and delusion, a cocoon that protects from having to honestly appraise the way they play the sport.

There was an interesting article in Golf Digest recently in which two top teachers Mike Adams and Terry Rowles,who works with a number of tour players including Australia’s Aaron Baddeley, on five things that a golfer can measure without the use of fancy equipment; albeit that access to a Trackman would be useful in one instance.

Adams asks his student irrespective to ability to go through their last five rounds and work out ‘the lost shots’; how many hazards they were in, how often they didn’t advance the ball into a better place, chunks, three-putts etc, as a starting point to understanding their score on a given day.

He contends that club golfers have no idea how far they hit the ball with a given club. “Hit 10 shots with each club and see how far your bad, average and great shots carry. You get a better idea of how safe your club selection is when there’s trouble between you and the hole.”

There are three other benchmarking tools: shot pattern (hit 10 balls on a range and see how many go left, go right or go straight. As Adams says “most players aim way too ‘straight’ for what their real shot pattern is”), landing angle and statistical data.

Everyone wants distance but Rowles warns: “I could build you a club in 20-minutes that goes 20 yards longer; if I get you 20 more yards from your eight iron but it flies like a six iron I haven’t necessarily helped you because you are not going to be able to stop the ball on the green.”

And finally Adams pointed out that statistics without context are meaningless and can create a false perspective. But the primary message is that club golfers who wish to improve must shine a light in the right places and take ownership, warts and all.

Paratore takes the quickest route to the top

Italy’s Renato Paratore demonstrated it is possible to play quickly and win after his victory in the British Masters at Close House. Slow play has long been a bugbear of the sport in all its forms, amateur and professional, but the 23-year-old certainly wasn’t hanging around when it came his turn to play.

The fact was highlighted on the European Tour’s social media channel as they put the clock on the Italian on a couple of occasions. On the PGA and European Tours, the first player to hit has 50 seconds to play his shot while the other(s) in a group have 40 seconds. If a player takes 60 seconds or more he will be notified he is being timed. That only stops if he goes two holes without a further bad time.

Paratore’s took 19.27 seconds to hit a tee shot to a par three and 14.0 seconds for a second shot to a par four on another occasion. He also managed 62 holes without a bogey, the second longest streak ever on the European Tour.

A half-century ago two of the sport’s legends Jack Nicklaus and Arnold Palmer teamed up to win the National Fourball Team Championship at Laurel Valley Golf Club in Ligonier, Pennsylvania. Having spent most of their careers as rivals on the golf course and great friends off it, they combined to show a clean pair of heels to the rest of the field that week.

Nicklaus alluded to the fact in an interview later in life that they rarely clashed coming down the stretch in the Majors but that there was still a huge interest among the fans to see which of them did better in a tournament. He recalled: “Arnold and my rivalry became more from the two us. We would play together a lot. We were paired a lot. And usually we beat each other up and we ended up giving the tournament away. That’s why they talk about the rivalry. Everyone was interested in who won that day, not who won the tournament.”

There was a three-way tie for second place among the teams of: George Archer and Bobby Nichols, Bruce Crampton and Gardner Dickinson and Sam Snead and Orville Moody who all came in at 22 under par with a 262 total. They each received $8,167 for their efforts.

“The Tour and Close House have done an amazing job. When we turned up on Monday, I was surprised how thorough everything was. I knew we were going to be on lockdown, but the testing protocol we have all been through has been a success. I don’t think anybody has tested positive so hopefully, they will carry on next week.” – British Masters tournament host Lee Westwood.

@maxhoma23 “I’m gunna tweet like other professional golfers’ agents tweet (for them) for a while. See if it is less mind-numbing and divisive lol reading some responses can’t be good for winning tournaments and I wanna win tournaments. On to Muirfield Village” – The American is one of the most interesting golfers on Twitter but has recently decided to take a step back from the platform. It worked as he finished tied third at the 3M Open.

What’s in the bag: Renato Paratore (Winner of British Masters)

Player A and Player B are partners in a foursomes competition. Player A drives at a hole and there is doubt as to whether the ball is out of bounds or not. After a short discussion the pairing decides to play a provisional ball but should it be Player A or Player B who hits the tee shot?

If Player A and Player B decide to play a provisional ball, it must be played by the partner whose turn it is to play the side’s next stroke. In this case it would be Player B. Rule 22.3.