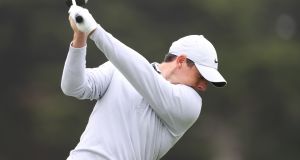 Rory McIlroy drives during a final practice round prior to the start of the US PGA Championship at TPC Harding Park in San Francisco. Photograph: Jamie Squire/Getty Images

Until a recent rebrand, this was the Major labelled glory’s last shot. This time, the world’s best golfers have arrived at Harding Park in San Francisco grateful for a belated shot at glory.

The backdrop to this US PGA Championship will almost prove to be as interesting as its leaderboard. That the first Major of 2020 takes place minus spectators will naturally alter perspectives, including from the players themselves. “It is funny, there’s no grandstands, there’s nothing to really frame the greens,” said Rory McIlroy.

“There’s still a little bit of a build-out. You can tell that there’s a golf tournament here at least. Maybe not a Major championship. Look, it’s different, but it’s just nice to be here, nice to be playing. The ropes are up, not as if that’s going to make a difference. But there’s enough around to make it feel like it’s a big tournament.”

Having struggled to retain sharp focus during the PGA Tour’s resumption – McIlroy is used to fairways lined with galleries – the Northern Irishman now seems anxious to back away from excuses. “I think we’ve all had to get used to it,” he added. “At this point I have got used to it.

“I’ve played five tournaments since coming back and obviously there’s been no crowds. For me personally, it’s just taken a little while to get used to that. I should be pretty much adapted to it now.

“It’s just a different time and we all have to deal with different things and adapt. If having to play golf without fans, if that’s in the forefront of my mind as one of my biggest concerns, then everything is okay.”

Five years have passed since McIlroy triumphed at Harding Park in the WGC Match Play event. The recently-deposed world number one needs no reminder that 2014 marks the last of his four Major wins. “I think everyone that stands up here wishes they would have won more and would have played better,” McIlroy said. “I’ve given myself chances, I just haven’t been able to capitalise on them.”

Given his driving ability, plus that course-and-distance specialism, this week’s event should be suited to McIlroy. The counterpoint is a highest finish of 11th post-lockdown. “I shot a 63 at Colonial, I shot a 65 to make the cut at Hilton Head, had a 63 at Travelers and a couple of good scores last week in Memphis,” he said. “So the good stuff is in there. It’s just the sharpness and being efficient with my scoring, turning the 73s into 70s.

“I feel like my game is really close. Even the mediocre scores that I’ve shot I’ve come off the golf course thinking: ‘Well, I actually didn’t play too badly, I just didn’t get a lot out of the round.’ If I can just keep playing like that and keep being a little bit more efficient with my scoring, I’ll be right where I need to be.”

Lost in tales of epic form decline is that Jordan Spieth, now 27, needs “only’” this title to complete a Grand Slam of Major wins. “Majors aren’t necessarily totally about form,” he said. “They’re about experience and being able to grind it out, picking apart golf courses. So I feel like I probably have more confidence going into a Major no matter where my game is at than any other tournament.”

If he retains the Wanamaker Trophy on Sunday, Brooks Koepka would become the first golfer since Peter Thomson in 1956 to win the same Major three times in succession. “The way the course sets up eliminates pretty much half the guys,” said Koepka. “And then from there, half of those guys probably won’t play well. Then from there, I feel like mentally I can beat them, the other half.” It sounded oh-so-simple. – Guardian