‘If I can roll a few putts in early this week . . . you never know what could happen’ 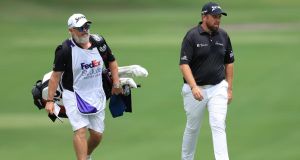 Shane Lowry believes he can challenge for back-to-back Major victories in the US PGA Championship if he can find his feet on the greens at Harding Park.

Lowry’s defence of the Claret Jug has been put on hold until 2021 by the cancellation of this year’s British Open at Royal St George’s, while the Masters and US Open have been postponed until November and September respectively.

With the US PGA also delayed from May until August, Lowry has unusually enjoyed 13 months as the most recent winner of a Major, but the 33-year-old is not about to rest on his laurels.

“Like I always say, the best players in the world are here and if one of them brings their A game they’re going to be very hard to beat. I’ll go out there and do my best, but if I can roll a few putts in early this week and get a bit of confidence going, you never know what could happen.

“The golf course is playing great. It’s going to be very difficult because it could be quite cold and playing long and the rough is thick and bad in places.

“It’s just going to be a difficult week, and I just feel like if I can play my best golf, I can give myself a chance this week.”

Lowry was pleased with his form before golf was forced to shutdown due to the coronavirus pandemic and missed three cuts in the first five events when the PGA Tour resumed, but he was sixth in the WGC-FedEx St Jude Invitational on Sunday thanks to four sub-70 rounds.

That event saw regular caddie Bo Martin back on the bag and Lowry also benefited from finally being able to work again with coach Neil Manchip in Memphis.

“I’ve really struggled on the greens and I’ve been on my own trying to figure it out for myself,” Lowry added.

“I hadn’t seen Neil since March and no matter how many videos you send to them or how many calls you do over the phone, it’s quite difficult to do it when you’re not in person.”

Lowry will play the first two rounds in San Francisco alongside Brooks Koepka, who is seeking an historic third straight US PGA title, and US Open champion Gary Woodland.

It is a marquee group of Major champions that would normally draw a big gallery, but with no spectators allowed at Harding Park that is just another thing that Lowry has missed out on in these unprecedented times.

“I was so looking forward to going to Augusta in April as the Open champion,” he added.

“I was looking forward to going to Ireland to play the Irish Open at Mount Juliet, a place that I love, as the Open champion and just getting to enjoy all that.

“All these tournaments, yes, it’s great to be back playing golf, but it would be better if things were just normal and we were playing in front of crowds and you were getting the chance to live life normally.

“But like I keep saying, it is what it is now and we just have to deal with it and make the best of a bad situation and get on with it.”