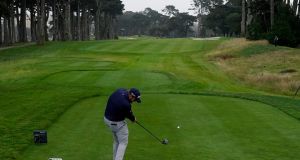 Shane Lowry of Ireland hits his tee shot on the 10th hole during the first round of the US PGA Championship at TPC Harding Park in San Francisco. Photo: Charlie Riedel/AP Photo

To say a lot has happened in the last 384 days would probably be the understatement of the year but that’s how long it’s been since a golf ball was hit at a Major championship when Shane Lowry claimed the famed Claret Jug at Royal Portrush.

It’s been a long reign for the Offaly native as the most recent Major champion in golf but Lowry’s chances of maintaining that title come Sunday evening in San Francisco remain intact after a two under par opening round of 68 at the rescheduled USPGA Championship.

In the traditional grouping of the defending champion and most recent Major winners, Lowry took his place in the spotlight alongside Brooks Koepka and Gary Woodland at TPC Harding Park on the shores of Lake Merced, just a few miles from San Francisco.

And while Koepka – looking to become the first man since Peter Thomson in 1956 to win the same Major three years in a row – ominously set out his stall on the opening morning with an impressive round of 66 to sit at four under par and one shot behind early clubhouse leader Jason Day, Lowry will also be pleased with his lot on a typical gloomy Northern California morning.

Indeed the 33-year-old tweeted on Wednesday that long sleeves in the summer were his “kind of golf” and the temperatures in the mid-teens with a chilly breeze which stiffened as Lowry’s round went on were not dissimilar to a typical day of golf in Ireland.

Starting at the 10th, Lowry opened with four pars in a row, including a great up and down save from the back of the green on the 12th. His first movement from par would be the wrong way when he three-putted from 35 feet on the Par 4 14th to card a bogey and slip back to one over par.

However, despite missing a good chance for birdie at the 15th, he persevered and eventually got his reward on the Par 3 17th after a stunning tee shot from 164 yards finished three feet from the hole, leaving him with an easy putt for a birdie two.

A par at the 18th completed a level par front nine before a birdie at the Par four 1st, after a wedged approach to six feet, moved Lowry under par for the first time.

And the solid golf continued with five pars on the spin before another birdie at the seventh – his 16th – after an exquisite wedge approach to two feet moved Lowry to two under par.

There may be an element of frustration in failing to birdie either of the two Par 5s and missing four birdie putts inside 15 feet during his round but, with two pars to finish, the 2019 British Open winner is nicely placed heading in to the second round.

Tottenham’s Carabao Cup tie at Leyton Orient off but no decision on walkover 17:45
Digital passport system could ensure horse movements if Brexit deal agreed 15:45
Awarding of 2023 Rugby World Cup to France part of Laporte investigation 16:12
Suarez’ Italian language exam rigged according to prosecutors 14:24
Why this weekend’s Champions Cup semi-finals are still worth watching 13:32
Here is your handy guide to sport on television this week