Rory McIlroy opens up with blistering 63 at Travelers Championship 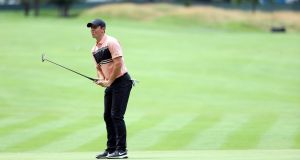 Rory McIlroy reacts to a missed putt on the seventh green during the first round of the Travelers Championship at TPC River Highlands in Cromwell, Connecticut. Photograph: Maddie Meyer/Getty Images 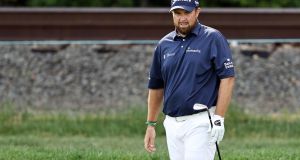 Shane Lowry on the 13th green during the first round of the Travelers Championship at TPC River Highlands in Cromwell, Connecticut. (Photograph: Elsa/Getty Images

The temptation to zoom in on some normality came via Rory McIlroy. The world number one has what Phil Mickelson, one of his playing partners in the first round of the Travelers Championship, described as “one of the most beautiful golf swings this game has ever seen,” and the Northern Ireland golfer was in masterclass mode as he opened with a seven-under-par 63 at TPC River Highlands in Cromwell, Connecticut on Thursday.

On a course with a history of low-scoring, Canada’s Mackenzie Hughes had a chance to shoot in the 50s, but left his long, 40-foot birdie putt on his closing hole short of the cup. Hughes, whose sole PGA Tour win came in the RSM Classic in 2016, had a bogey-free 10-birdie salvo to claim the clubhouse lead with a career low round of 60.

If truth be known, McIlroy’s score could have been a few shots less only for burning the edges with a number of birdie putts. Still, the 31-year-old’s round of an eagle, six birdies and a lone bogey was sufficient to propel him straight into contention in the third of the PGA Tour’s comeback run of tournaments, while Shane Lowry, having missed the past two cuts, finally found form with an opening round 66.

McIlroy’s lacklustre performances in the opening two tournaments – tied-32nd at Colonial, tied-41st at the Heritage – were, nevertheless, deemed a “success” in that they got him up to speed competitively.

“You can’t base everything off results in this game and I took a lot of positives out of the last couple of weeks . . .. you’re sort of trying to get yourself into contention, but at the same time there’s so much big stuff coming up at the end of the year and that’s really what you’re trying to build towards,” said McIlroy.

In a marquee group alongside Mickelson, who recently turned 50, and the hulked-up Bryson DeChambeau, McIlroy got going with a bang on the Par-5 13th, his fourth hole, where his iron approach from 216 yards finished 11 feet from the flag. He rolled in the eagle putt and then kept on the threes trail with birdies at the 14th and 15th before his only blip came at the Par-3 16th where he missed the green and, from thick rough, could only get the ball to 15 feet and missed the par save.

However, a further four birdies, and an abundance of other chances, enabled McIlroy to steer a route towards the top of the leaderboard. An example of his creativity came on the second when, having pulled his drive into rough, his wedge approach over trees came to rest two feet from the pin for a near tap-in birdie.

For sure, it was a strong start although McIlroy identified a personal issue with his weekend play of the past few weeks.

“It’s just been nice to get back into some competitive golf again. It doesn’t feel the same because you’re not having thousands of people reacting to your birdies and getting that going.

“I felt the weekends have been a little flat for me just because that’s when you’re in contention and that’s where you sort of start to feel it. Thursdays and Fridays don’t feel that different to be honest, but into the weekends they do.”

Lowry, for his part, had contacted PGA Tour commissioner Jay Monahan prior to the tournament to inform him he’d played a practice round on Tuesday with Brooks Koepka, who had his regular bagman Ricky Elliott on the bag, and his brother Chase. The Koepka brothers withdrew after Elliott had a positive Covid-19 test, even though a second test carried out on the caddie showed up negative.

Monahan told Lowry he was fine to play given he had not been in what was deemed to be close contact. “I think the first couple of weeks have been kind of a kick in the backside to all of us and to make sure that we do the right things when we’re out there because even I’m guilty of it. I fist bumped the first couple of weeks, there’s no doubt,” admitted Lowry.

“We’re just taking precautions. I’m not going near the clubhouse all week, I wear my mask into scoring, I’m not allowed in for lunch now. I’m kind of just being as cautious as I can. I spoke to Jay and he said that I’m good to play. So I’m here to play.”

And the Offalyman finally managed to put together a good round, with five birdies – at the 13th, 15th, second, third and sixth – before a three-putt bogey on the eighth, his penultimate hole, to sign for a 66.

Shamrock Rovers to meet Cork in FAI Cup second round