Rory McIlroy glad to head for different test in Connecticut 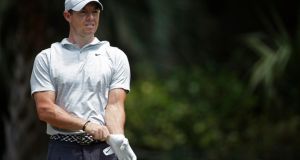 Rory McIlroy heads for his third PGA Tour event in a row at the Travelers Championship this week. Photo: Gerry Broome/AP Photo

Don’t expect Rory McIlroy to factor in the links at Harbour Town in future scheduling, for his return there for the RBC Heritage only served to reaffirm why he hadn’t included it in his season’s itinerary for more than a decade and why it had only inveigled a way into his schedule due to the PGA Tour’s reshuffling of the calendar because of the coronavirus pandemic.

The 31-year-old Northern Irishman was below par in many aspects of his game, which eventually saw him finish tied-41st, some 10 shots behind winner Webb Simpson. Prior to the enforced break to the PGA Tour in March, McIlroy had been six for six in top-10 finishes but his return to competition has been a slow one, with finishes of 32nd at the Colonial on the tour’s restart and now a 41st place ahead of competing in his week’s Travelers Championship at TPC River Highlands in Cromwell, Connecticut.

“There’s other courses on tour that probably fit my game a little bit better,” conceded McIlroy of his re-acquaintance with the Pete Dye-designed course in Hilton Head. It would be a surprise if it were to feature going forward in his scheduling for future seasons.

Certainly, at just 6,841 yards, which is certainly on the shorter side of courses on the circuit, TPC River Highlands wouldn’t usually fit into the norm for big-hitters like McIlroy, who has compared it to Hong Kong on the European Tour. “You need to be accurate . . . you feel you can be super aggressive but (need to) reign that back, knowing that there’s plenty of opportunity and just to stay patient,” McIlroy has said of the demands placed on players at the venue which year-in, year-out features in player polling as the favoured stop on the PGA Tour.

McIlroy remains in the world number one position heading into the Travelers but, just as it was at Colonial and then Harbour Town, Spain’s Jon Rahm could leapfrog him into the top spot in the world rankings with a win. Rahm, like McIlroy, has also experienced a slow restart to the season with a missed cut followed by a tied-33rd finish.

The return to duty for Shane Lowry and Graeme McDowell has been even more lacklustre, with the two players missing both cuts in the past two weeks. Lowry and McDowell will be aiming for better form in their third week of tournament play at the Travelers.

Webb Simpson, who birdied three of his closing four holes in a final round 64 for a total of 22-under-par 262 to claim the RBC Heritage, the seventh win of his PGA Tour career, jumped him up to a career high fifth in the updated world rankings.

If Simpson were to back up his Heritage win with another success in the Travelers, he would potentially jump up to number two. And that upward trending is very much on his mind, “We’re nuts. We always think we can get better, and I think there’s room to grow,” said Simpson, who revealed he had been inspired by how Justin Rose managed to get to world number one back in 2018. When Simpson won the Players in 2018, it moved him to number 20 at that time.

“Justin Rose is kind of my inspiration. He seems like he’s always there every week. I works hard at his craft and I just thought, ‘I have good weeks, I make it to the Tour Championship (and) I’ve won a few times. But I really have a desire to be in the top 10 or 15 guys in the world ranking all the time and have chances to win, not just twice a year but as many times as I can’. So that led me to just look at every part of my game, whether it’s working out or the mental approach, and see if I can get better. That was three years ago probably. It feels great to see the hard work pay off and see that the process I’ve put in place is working,” said Simpson of his continuing upward movement.