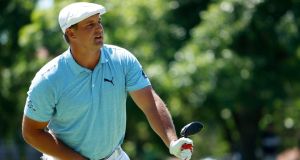 Bryson DeChambeau returned to action having bulked up during lockdown. Photograph: Tom Pennington/Getty

Not quite a case of little and large, given that both Bryson DeChambeau and Gary Woodland each reach to a height of 1.85 metres (6 feet 1 inch) without the need of any extra centimetres from their golf shoes, but their physical transformations during lockdown have been quite the eye-brow raiser.

Where DeChambeau’s body has been transformed into something akin to the Hulk in adding some nine kilos (20lbs) to his body mass, Woodland opted to go the other way and shed some 11 kilos (25lbs) in getting a more sleek bodyline as he aims to play 10 out of 13 weeks on the PGA Tour’s restart.

DeChambeau - tied-third behind Daniel Berger at the Colonial with his new-look, muscular physique - is certainly living up to his reputation for using scientific methodology in his attempts to improve his golf game with the primary aim to increase his distance off the tee, the player estimating he has added some 30 yards with the driver, with extra swing speed a main component of that increase.

“My ultimate goal is to get as strong as I can,” said DeChambeau. “I’m just going to keep proportionally making everything stronger and applying some force and speed to the golf swing to see what it can handle.”

One other offshoot of his increased body mass has been to see his shirt size go up two sizes, from medium to XL. Although there has been no increase in his hat size. As he put it: “There’s not that many muscles up here that I can train around the brain. That’s pretty much stayed the same.”

The return of the men’s world rankings with only golf in the United States might seem very unfair to tour players who ply their trade on the European Tour - and indeed in Asia - but there is little they can do about it now that it has kicked back into play.

Frozen since the middle of March, the Rolex rankings rebooted with the return of the PGA Tour and the Korn Ferry Tour stateside and the upward jumps of the respective winners reflect that fact that they had the show to themselves: Daniel Berger leaped from 107th to 31st in the rankings for his success at Colonial, while Luke List’s win on the secondary circuit saw him leap from 180th to 136th.

50-51/52 - Phil Mickelson - aka Lefty - celebrates his 50th birthday Tuesday: although a jump across to the Champions Tour is unlikely to come any time soon, the significant roundy birthday is further proof of Mickelson’s longevity and competitiveness in a professional career that started in 1992. Mickelson is a five-time Majors champion (3 Masters, 1 PGA and 1 British Open).

Meanwhile the horrible horse-shoe lip-out suffered by Xander Schauffele on the penultimate hole of regulation play at Colonial was a rare blip: up to that point, he had been 51 out of 51 for putts inside five-feet during the four rounds of the Charles Schwab Challenge. The horse-shoe on the 17th cost Schauffele a place in the play-off.

“I just got into a rut and played a bad run of holes” - Rory McIlroy of his front nine 41 that included four bogeys and a double-bogey as he played his way out of contention in the Charles Schwab Challenge. McIlroy is again in the field for this week’s PGA Tour stop, the RBC Heritage at Hilton Head where Shane Lowry and Graeme McDowell, a former winner, are also in the field.

“Fair does Bryson. I always said that if I ever got the chance I’d smash the gym for few months. Well I’ve had the chance during lockdown and all I’ve smashed in the biscuits!” - European Tour player Paul Waring on Bryson DeChambeau’s bulked up physique.

“I watched Daniel Berger hit off 10 Thursday morning. Hit a pull duff into hazard. Hit tree and bounced into middle of fairway. I said to m caddy @bdavistwo He will probably win now” - PGA Tour player Cameron Percy highlighting the thin line that exists on tour.

“Tough pill to swallow, but that’s how it goes sometimes. Playing good golf and excited for @RBC_Heritage Congrats to @DanielBerger59 on the win” - Xander Schauffele tips the cap to Berger.

At the start of the final day’s play at Merion, all eyes were on Phil Mickelson in his quest to claim a US Open title which had proven so elusive throughout his storied career. Lefty’s own expectations were high too, however a tough start - three-putting the third and fifth holes for double bogeys - put Lefty on the back foot. Still, on his birthday, Mickelson regained the lead with an eagle on the 10th to again raise expectations. It was not to be, though.

Justin Rose, who had started the final round in a share of fifth, two shots behind 54-hole leader Mickelson, was the one who raise to the challenge of the tough Philadelphia layout: the Englishman - shooting a final round 70 for a one-over-par total of 281 - claimed his breakthrough Major title, finishing two shots clear of Mickelson and Jason Day.

Q - In arriving to her ball in the rough, Player A finds that it is actually positioned on a sprinkler head. She is entitled to a free penalty drop and, in this case, she is able to take the relief back out onto the fairway. Is she entitled to do this?

A - Yes. Rule 16.1/1 - Relief from Abnormal Course Condition May Result in Better or Worse Conditions - covers such a situation. If a player receives a better lie, area of intended swing or line of play in taking relief under this rule, this is the player’s good fortune. There is nothing in Rule 16.1 that requires the player to maintain identical conditions after relief is taken. So, in this situation, the player’s nearest point of complete relief or relief is on the fairway and results in the player being able to drop a ball in the fairway.