Koepka, Berger and McDowell among the non-starters in the Travelers 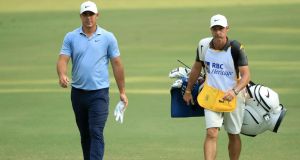 Only time will tell if the decision to go ahead with the Travelers Championship at TPC River Highlands in Connecticut proves a sensible one, or will be damned on historic reflection.

For, despite a significant number of Covid-19 positive tests, among players and caddies, and the withdrawal of no fewer than seven players from the tournament, the PGA Tour’s route back towards a semblance of normality reached a fork in the road and the option taken was to proceed rather than retreat.

On the eve of the championship, the third tournament behind closed doors in the PGA Tour’s restarting of its schedule, a number of positive results among players, caddies and family members led to series of withdrawals but with the tour’s commissioner Jay Monahan claiming, “We feel like we’re on a path that’s going to allow us to continue to sustain our return to golf!”

Brooks’s brother Chase also withdrew, because of being in close contact with a positive case, while Webb Simpson – winner of the RBC Heritage last Sunday – also withdrew after a family member tested positive.

Unexplained, there were further withdrawals from the tournament by the in-form Daniel Berger, Nate Lashley and US Ryder Cup captain Steve Stricker.

In a memo to all to PGA Tour players, and given how the circuit’s return was taken to set protocols for other major professional sports in the United States getting back to competition, an emphasis was put on the responsibility of players to follow protocols.

This followed actions at the RBC Heritage in Hilton Head last week where players were seen fist-pumping and high-fiving and social distance was the exception rather than the rule.

“It’s pretty clear that this virus isn’t going anywhere . . . we’ve had three positive tests this week. I think everybody should expect that you’re going to have more tests as we go forward and we are going to be very sensitive to the specifics of every single test. But we’re going to be spending a ton of time making sure we reinforce the strong protocols we have,” insisted Monahan in outlining that the tour would continue onwards, with spectators – as of now – expected to return at next month’s Memorial tournament in Ohio.

As one withdrawal followed another on the eve of this tournament, it seemed for a time that the tour might consider cancelling the event but the decision instead was taken to go ahead.

“We’ve been thorough in building and implementing a programme that mitigates as much risk as possible; we knew it would be impossible to eliminate all risk, as evidenced by the three positive tests this week. We need to use these developments as a stark reminder for everyone involved as we continue to learn from an operational standpoint,” said Monahan, with more stringent testing procedures being introduced going forward.

Of the upward spiralling of cases in the United States, Monahan admitted: “I’m concerned, but I’m also confident in the programme and protocols we’ve put in place and our ability to be able to sustain the PGA Tour and give our players opportunities over the course of the year; so long as we continue to be as diligent as we intend to be.”

While Champ was the only player to test positive, the other withdrawals were due to close contacts with positive cases. McDowell, despite having two negative tests, withdrew after learning his caddie Comboy – who remained in quarantine in Florida – had tested positive.

Koepka had played a practice round with McDowell on Tuesday and his caddie Elliott had a positive result followed by a negative result. The world number four withdrew, saying: “I’m going to pull out to protect everybody else, it’s the right thing to do. I don’t want to risk anybody’s life if they have respiratory issues or underlying conditions”.

What’s for sure, though, is that the PGA Tour’s return – just over two and a half weeks in – has gotten ever more turbulent. In negotiating the speedbumps, the fork taken may yet lead into a cul-de-sac.