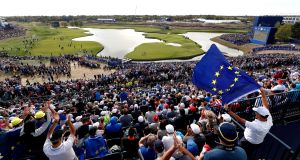 The PGA of America insist that the Ryder Cup will go ahead as planned at Whistling Straits. Photo: Luke Walker/Getty Images

Is it on, or off? Although there is renewed speculation that the Ryder Cup will be postponed for a year, the PGA of America has insisted the match “remains as scheduled” for September 25th-27th at Whistling Straits in Kohler, Wisconsin, but with the rider that it “continues to follow the guidance of federal, state and local public health authorities. The safety and well-being of all is our highest priority.”

So, it’s still on as planned. For now, anyway. But the situation remains a fluid one, and Patrick Reed, the man dubbed “Captain America” for the intensity he has brought to the match, has become the latest player – joining a list that includes Rory McIlroy and Brooks Koepka – to urge that it be postponed if there would be no fans allowed at the venue.

“It’s just one of those things that with the unfortunate times and the scary times we’re going through right now that the PGA (of America) and both teams, they need to make the best decision, not just what’s best for the people and the players but also the best thing for the history of the tournament. And trying to play that event with no fans, I would prefer them to push it back to where we can have fans than to go out and play without fans,” said Reed.

He added: “You want to have the banter back and forth with the crowds. If you’re a home team, you basically want that (extra) man. If you’re the away team, you’re expecting to kind of go into a hostile environment. Without fans, it seems like it would be hard for everyone to get up and show the emotion that you normally would whenever you have fans there.”

Jon Rahm, the world number two, also advocated that it shouldn’t go ahead as planned if there would be no fans.

Speaking at TPC River Highlands ahead of the Travelers Championship, Rahm said of the speculation that an announcement deferring the match could be made next week: “None of that info has come from the PGA of America or European Tour, PGA Tour. It’s not official, so we don’t know,” adding: “The situation is obviously very difficult and the Ryder Cup is a very, very special event. If we can’t play with fans, I don’t think we should play this year. It’s the one event we don’t play for us, we play for the US or we play for the continent of Europe and the countries we represent. We play for the fans, and the fans make what the Ryder Cup is. So I think it should be played with fans.

“Now, if they can make it maybe with a limited amount, still only four groups on the golf course, if you have 10,000 people instead of 40,000 you might be able to work it out, but I think it would be wiser to wait until 2021 just because also European players are not being able to play until later in the summer. The PGA (of America) and the European Tour have a very tough decision to make, but I would be surprised if it actually does happen this year. I’ll be okay either way. If it’s played this year, I’d rather it be with spectators, and I hope it is with spectators. If not, I would rather wait until 2021.”

For now, the PGA of America – who run the biennial match when it is staged in the USA – is insistent that the event will go ahead as planned, which matches up with Europe captain Pádraig Harrington’s observation that he would expect to be “in the first group to know” if any decision had been made to postpone the match for a year.

If, as the Guardian has reported, the Ryder Cup match will be postponed for a year – reverting to odd number years as it once was before it was postponed in 2001 due to the 9/11 terrorist attacks and held a year later in 2002 at The Belfry – then it could conceivably provide a window of opportunity for the Dubai Duty Free Irish Open to be rescheduled for that week.

The Irish Open was originally set to be played at Mount Juliet in May, but was postponed due to the coronavirus pandemic.

The European Tour is set to restart next month with a so-called UK Swing and with dual badge events in Austria, but there appear to be only two potentially viable dates to fit the Irish Open into the calendar: one would be that Ryder Cup week (September 24th-27th), if it became available, which follows the US Open at Winged Foot, and the other would be the week after the BMW PGA at Wentworth (October 22nd-25th), which may require a reduced field with less light at that time of the year.

Meanwhile, the GUI and the ILGU has confirmed that the Return to Sport Expert Group has given the go-ahead for golf to move to phase three in the easing of restrictions from next Monday, June 29th: the protocols will see four-balls allowed at 10 minute intervals, competition to resume with visitors permitted at golf clubs, and for restaurants and bars operating as restaurants to open under strict guidelines.