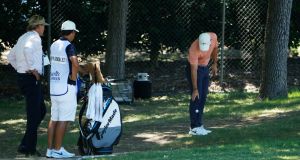 Rory McIlroy takes a drop on the first hole during his final round in Texas. Photograph: Tom Pennington/Getty

Rory McIlroy came into the PGA Tour’s first tournament back from a three-month Covid-19 break as the favourite to win but after a number of miscues in the final round on Sunday the Northern Irishman was not even the highest-placed Rory in the field.

World number one McIlroy began the day three shots off the lead but struggled over the front nine en route to a four-over-par 74 at Colonial Country Club that left him at six under for the week and in a share of 32nd place.

Not only was McIlroy unable to mount a charge but he also finished the week four shots back of South African namesake Rory Sabbatini, who shot a bogey-free, five-under-par 65 to finish the Charles Schwab Challenge in a share of 14th place.

“I got off to a really bad start,” said McIlroy. “Hit a loose second shot on the first hole up to the right and then sort of messed around and took bogey there, so not the ideal start.”

The four-time major champion came into the week with plenty of confidence as he had six top-10 finishes in his six starts on the PGA Tour this season, including a win at the WGC-HSBC Champions event last November in Shanghai.

Yet McIlroy never gave himself a chance on Sunday as he opened his final round with a bogey and then dropped another five shots over a miserable six-hole stretch that put him at six over for the day heading into the turn.

McIlroy responded with a birdie at the 10th hole but by then the damage was already done. After a bogey at 15 McIlroy birdied two of his final three holes and will now focus on next week’s RBC Heritage in Hilton Head Island, South Carolina.

“The wind was up today. You didn’t have to be that much off for it to sort of show, and missed a couple of greens in the wrong spots and made bogeys,” said McIlroy.

“You know, sort of played all the way to the end, shot a decent back nine. I was a couple under on the back,” said McIlroy. “But front nine I just got into a rut and played a bad run of holes, and obviously that put me out of the tournament.”