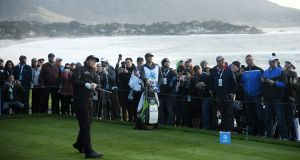 Phil Mickelson of the United States during the final round of the AT&T Pebble Beach Pro-Am. Photograph: Harry How/Getty Images

Phil Mickelson held a three-shot lead on 18-under par with two holes remaining as darkness halted play in the weather-hit final round of the Pebble Beach Pro-Am on Sunday.

Scott Stallings (66) was in the clubhouse on 15-under 272, tied for second with Mickelson’s playing partner and overnight leader Paul Casey. Jason Day (68) and Kim Si-woo (68) were two strokes further back on 13-under 274.

After a late morning hailstorm delayed play by more than two hours, Mickelson wasted no time in making up the three-shot deficit to Casey.

The 48-year-old American picked up three strokes in his first nine holes, then three more coming home to put him in pole position for the Monday finish.

“It’s been a great day so far (but) it’s not over, we’ve got to finish it off,” Mickelson said. “I don’t want to jump the gun and look ahead. I’ve got two difficult holes coming up.”

With the light failing on Sunday, Casey opted against trying to get the tournament finished.

“I get exactly where Paul is coming from,” Mickelson said.

“It’s dark and we have a chance to come out tomorrow on fresh greens. I have pretty good vision, I’m playing well and I wanted to continue.”

After an early birdie, Casey struggled to make anything happen. He was on even par for the round when play was suspended.

“There’s still a glimmer,” Casey said of his chances. “I need to do something special.”

Thirteen of Mickelson’s 43 PGA Tour victories have come in his home state of California. With a victory, he would match Mark O’Meara’s record of five victories in the event, which dates back to 1937 when it was won by Sam Snead.

Ireland’s Graeme McDowell closed at eight under after a fourth-round one-under-par 71.