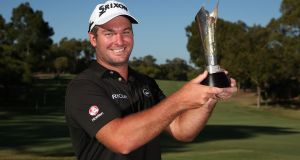 Ryan Fox with the trophy after his victory in Perth. Photograph: Paul Kane/Getty

Paul Dunne had to settle for podium place Down Under as New Zealand’s Ryan Fox won his first European Tour title with victory in the ISPS Handa World Super 6 in Perth.

The innovative event sees the players compete in three rounds of stroke play before the top 24 go head-to-head in six-hole knockout match play to determine the winner.

Dunne claimed third place after beating Zimbabwe’s Scott Vincent on the first extra hole of the play-off for third/fourth place. That was good enough for the Greystones man to take home a cheque for €61,121 and move up to 41st in the Race to Dubai standings which are still led by Shane Lowry.

Dunne won’t be in the field for the WGC Mexico Championship which begins on Thursday with his next appearance coming at the Oman Open on Thursday week.

In the third place playoff he was two up after two in the battle for third but Vincent holed a long putt on the fifth and won the sixth to take it to the extra hole, where the Zimbabwean put his tee-shot in the grandstand.

That left the way clear for Dunne to hit the pin with what proved to be his final shot of the week after Vincent’s concession.

“I thought I had it won with two holes to go,” he said. “I was in nicely, five feet on the second-last hole, and Scott was 35 feet and he holed it.

“Without the wind and the situation it’s a pretty basic shot, like 99 yards from a ball in hand, but it was nice to pull it off and get third place. I would have preferred to go a couple better.”

He added: “Six holes is so short, anything can happen. Normally in match play momentum is so important but over six holes you can’t even get momentum, it’s just a matter of throwing shocks in people’s faces and seeing how they react to it.”

Fox, who lost a play-off to Russell Knox in the Irish Open last year, said in an interview broadcast on Sky Sports: “I’ve been close a couple of times and it’s certainly nice to get one over the line today in a place I hold pretty special. I’ve played a lot of golf here and always enjoyed myself.

“Adrian didn’t quite play to his best this afternoon but I’m quite happy to take advantage of that.

“I played great this afternoon and felt probably under the most control in all the matches so it was nice to finish in style.”

Dunne, who partnered Gavin Moynihan to victory in the GolfSixes event last year, added: “I’m good friends with Ryan so I’m happy for him. His first win has been coming for a long time. Obviously it’s at my expense so it’s a little bittersweet, but if I was to lose to anyone this week I’m happy it’s Ryan.”

Matt Jager (Aus) lost to Paul Dunne at the 8th