Matt Kuchar’s stinginess may well come back to sting him 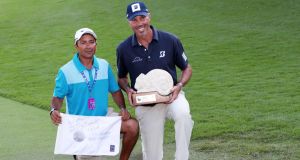 Matt Kuchar celebrates with caddie David Giral Ortiz on the 18th green after his victory in the Mayakoba Golf Classic in November. Photograph: Rob Carr/Getty Images

Bobby Jones once said that “golf is the closest game to the game we call life. You get bad breaks from good shots, you get good breaks from bad shots, but you have to play the ball where it lies”.

If golf is a reflection of life, better or worse, then perhaps we shouldn’t be surprised when it is reported by Golf.com that Matt Kuchar paid his caddie David Giral Ortiz, nicknamed ‘El Tucan’, $5,000 from his prize of more than $1.2 million after winning the Mayakoba Classic on the PGA Tour last year. The percentage cut of winnings that a caddie can expect to earn from a player’s win is generally between 8 and 10 per cent.

This is a life, after all, where estimates suggest US CEOs are paid 300 times what the average worker earns, up from 40 times the average in the 1980s. Wealth inequality has reached such a stage that the world’s richest 26 people hold the same wealth as the poorest 50 per cent.

It is in this world where a golfer like Kuchar, a man who has earned more than $46 million on the PGA Tour in his career, can justify such a brazen act of stinginess – a paltry chunk of the winner’s cheque.

Kuchar would say in his defence that he was not paying his regular caddie, rather a local caddie who had picked up his bag for the week. The base fee was agreed at $5,000, with bonuses depending on performance. Golf.com reports Ortiz was offered an additional $15,000, for a total of $20,000. He refused the offer, and thinks he has been taken advantage of.

“I am a humble man, who takes care of his family, and works hard. I am reaching out to you to see if you can facilitate me receiving a fair amount for my help with Matt winning $1,296,000. I am not looking to disparage Matt or give him a bad name. Fair is fair, and I feel like I was taken advantage of by placing my trust in Matt,” Ortiz wrote in an email to Kuchar’s agent Mark Steinberg, looking for a larger share of the winning pot.

Ortiz shared the one response he’s received from Steinberg, who is also the agent of Tiger Woods and Justin Rose, which read, “I am out of the country. What Matt has offered is fair.”

Ortiz lives in a small cinderblock house and said with a more substantial payment, he and his wife had hoped to start a laundromat. He said he makes as much as $200 on a good day as a caddie in Mexico, although half that is more typical.

“He was definitely my lucky charm,” Kuchar said after the win in November. “He brought me good luck and certainly some extra crowd support and did a great job as well. He did just what I was hoping for and looking for.”

When asked about the issue, first raised by fellow pro Tom Gillis on Twitter, Kuchar had denied the rumour, saying, “That’s not a story,” Kuchar said. “It wasn’t 10 per cent. It wasn’t $3,000. It’s not a story.”

It is a story now for Kuchar, who will learn that labels are not easily shed. For ‘El Tucan’, he got a bad break from a good shot in the game of life.