Thomas leads by one at Genesis Open with McIlroy five behind 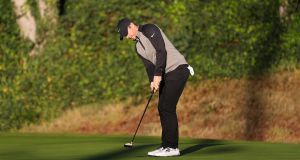 Justin Thomas took a one-shot lead over Adam Scott as play was suspended at the rain-delayed Genesis Open.

The American finished the final six holes of his second round on Saturday, carding a six-under 65, and managed two holes of his third round before the day’s play was ended due to darkness.

After mixing eight birdies and two bogeys in round two, Thomas was tied at the top with Scott on 11 under.

But the former world number one started his next round by rolling in a 13-footer for eagle at the par-five 1st hole to take an edge over his rival.

Australian Scott could only manage a birdie, and finished the day on 12 under through two holes.

Patrick Rodgers, tied with JB Holmes for third, completed a 67 before also opening with an eagle to sit two shots behind Thomas.

Paul Casey and Rory McIlroy improved on their opening rounds — carding second rounds of 66 and 63 respectively — and are both on eight under heading into the final day.

Tiger Woods’ second-round 71 — which included a birdie on the final hole — was enough to make the cut, and he started his third with three birdies and an eagle to scale the leaderboard and sit on six under.

The 76 players who made the cut now face a marathon session on Sunday as the delay to the start of the tournament continues to have a knock-on effect.

No one had completed the third round before play was suspended, with the action set to resume at 6.45am local time (2.45pm Irish time).

Full scores to follow on completion of third round.

1 Ken Early: Frank Lampard’s problems start at number one
2 James Ryan set for up to 12 weeks on the sidelines
3 The Offload: Schools rugby talk in the Seanad appears tone deaf
4 Man United in talks with Dortmund over €100m deal for Sancho
5 Rory McIlroy admits missing the crowds as he looks to end Major drought
Real news has value SUBSCRIBE