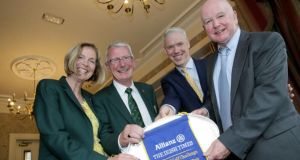 It was a close call but the bond of marriage proved too strong as Shandon Park denied the “noisy neighbours” Dunmurry in a countback to land the Allianz Irish Times Officers’ Challenge at Malone Golf Club.

There was plenty of banter and camaraderie as trios of officers wore their club colours with pride and took to the immaculate parkland tucked away in the leafy suburbs of south Belfast.

The renowned club, dating back to 1895, has hosted many great championships over the years and this latest chapter didn’t disappoint as teams battled for places in the national final at The K Club in September.

The Nuremore team of Cormac Lane (handicap 12), Ena Gilsenan (21) and Shaun Goodman (25) arrived at Malone with great expectations but knew they had a job on their hands to repeat former glories.

“We put ourselves under a lot of pressure because Nuremore has won this the last two years,” explained club captain Lane. “Three in a row would have been great but we’re still delighted to qualify for the final.”

The Monaghan club came third with a team aggregate of 74 points (two scores from three at each hole), four behind Dunmurry and Shandon Park on 78 with the latter taking the spoils on a countback.

It turned out to be a distinctly Belfast affair with Dunmurry’s Donna Gillespie (9), George Summers (19) and Dessie Houston (16) seeking top honours against the husband and wife partnership of Gillian (36) and Richard Cloke (20) alongside Collin Stevenson (13) in the Shandon team.

Scoring was steady on the front nine with Dunmurry two ahead on 38 points at the halfway stage. However, indications of Shandon’s intent quickly emerged when Stevenson recorded a timely birdie at the difficult par four 10th.

Dunmurry kept their composure all afternoon and nine handicapper Gillespie finished particularly well with two pars and a birdie.

“We were just delighted to make it into the winners’ enclosure,” enthused lady captain Captain Gillespie, who made birdie at the par five 17th after finding the long green in two. “It was very close and came down to the final putts on the 18th green. We know the course very well because we are the noisy neighbours from across the road.”

Dunmurry captain Summers indicated his role on the day was more of selection and support.

“I’m glad I brought a good team with me. Selection is my forte . . .inspiring others to play well,” quipped Summers. “Seriously, it has been a wonderful day, huge thanks to the sponsors Allianz and The Irish Times and also to Malone, the hospitality has been exceptional.”

In the end, Mr and Mrs Cloke, respective club captains at Shandon Park, were able to take time out of their busy schedules to do the business alongside Stevenson.

“I speak for all the competitors in saying this was such a well organised and fun event. It really has been a highlight of the year,” enthused Richard after receiving the top prize from Peter Kilcullen, Allianz Ireland chief custom officer.

“We dovetailed extremely well and that was the key to our success. When I started to fall away on the back nine, Gill and Collin stepped up to the mark.”

Lady captain Gillian was modest in the assessment of her own game but accepted she played a key role at the signature par three 15th over water.

“I played it safe to the right at 15 after both my playing partners plonked it into the water. I think egos got in the way for the men. I’m only a 36 handicapper but I suppose those three points at 15 were crucial in the end,” said Gillian with a smile and a glance to her husband.

So, was this husband/wife combination the key to success?

“Let’s just say, the dining room table is completely covered with everything other than dining room stuff! The diary is open and it’s all colour-coded, we haven’t got mixed up yet!

“As Richard said, this has been the highlight of our busy year so far and it was just lovely to have Collin’s company too. Now we have a trip to The K Club to look forward to and we can’t wait,” added the winning lady captain.

Allianz has supported the Officers’ Challenge for 26 years. The next qualifiers take place at Mount Juliet (July 10th) and Galway Bay (August 14th) before the final at The K Club on September 10th.