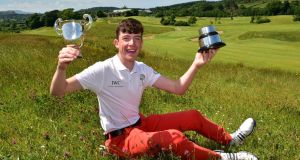 The Irish Ladies Golf Union has selected 12 players to represent Ireland at the European Ladies and Girls’ Team Championships in July.

Seapoint’s Dylan Keating carded rounds of 72 73 70 to overcame a four-shot deficit to win the Irish Boys U16 Championship at Castle Dargan.

Keating, 16, trailed overnight leader Josh Black going into the final round and it was only on the back nine that the Seapoint teenager took control. Birdies at 13 and 15 moved Keating to minus three while Black went in the opposite direction with a double bogey at 14.

Suddenly, Keating found himself one shot clear and his advantage increased over the closing stretch as Black dropped four more shots. Keating could afford to bogey two of his last three holes and still win by three.

Having recently completed his Junior Certificate, Keating – nephew of singer Ronan – finished with full marks, the only player in red figures after 54 holes.

Next for Keating is the Irish Boys Open at Belvoir Park when he will step up to under 18 level. For the moment, the Louth teenager can savour his first major success.

Mel Deasy from Bantry Bay shot 76, 72 and 71 for 219 to finish third overall on plus three. Deasy also took the prize for the leading under-15 player.

Mount Juliet’s touring professional Gavin Moynihan was a relieved man after he finished tied sixth in the SSE Scottish Hydro Challenge in Spey Valley Golf Club in Aviemore. Moynihan had not made a cut this year, but he was thrilled to put a nightmare run behind him, signed for 71, 69, 72 and 67 to finish six shots behind winner David Law on five-under par.

“Been a long time coming,” tweeted Moynihan, who picked up €7,300. “Very happy to finish T6 this week in Scotland on @Challenge_Tour. Been a rough run since Xmas so very happy with the week. Nice to sign off with a 67 too.”

On the Symetra Tour, Jordanstown’s Stephanie Meadow shot 70, 71 and 74 to finish tied 41st on one-under par 215 in the Island Resort Championship in Michigan, eight shots behind China’s Ruixin Liu. Liu carded 68, 70 and 69 for 207.

Leona Maguire missed the cut after roundsof 76 and 72.

The Derry-based professional carded nine pars, two eagles, six birdies and one bogey as he shaved one stroke off the previous best set by Philip Walton.

His success in Belfast follows his victory at the Heritage Challenge Pro-Am at the start of the month and second place at the Shell Pro-Am in Carne last week.

This year’s R&A 9 Hole Championship Final will be played on Saturday 14th July ahead of The 147th Open at Carnoustie and four Irish pairs have qualified for the playoff.

Tipperary duo of Sean Bohan and Ann O’Donoghue won the regional final at Tipperary Golf Club with combined 36 points, closely followed by Nenagh pair of Ray Deering and Madeleine Kelly who also had 36 points but the Tipperary pair won the tie on countback.

The pairing of Marie O’Reilly and Harry MacSweeney from Slade Valley have won the regional final in Killiney Golf Club with a combined 37 points in testing conditions.

The Ballinasloe pairing of Johnny Farrell and Catherine Owens who scored a combined 37 points came through at Tubbercurry.

At Rockmount the Dunmurry pair of Stephen Cairnduff and Julia Trinder scored an impressive 39 points to become the final winning pair who will travel to Carnoustie.

The K Club will play hosts to the Team Ireland Pro-Am on Monday, July 2nd. Team Ireland Golf scheme was established to assist Irish professional golfers in the early stages of their careers.

The scheme, administered by the Confederation of Golf in Ireland, provides financial and non-financial support to professional tour golfers, both male and female, wishing to achieve success at an international level.

The Minister for Transport, Tourism and Sport, Failte Ireland, the Irish Sports Council and the private sector also provide the funding for the Trust.