Brooks Koepka played by the rules - they’re not rocket science

Out of Bounds: It is up to the players themselves to know what is and isn’t allowed 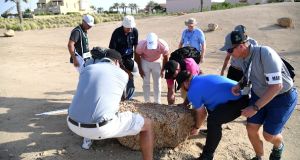 Brooks Koepka is assisted in moving a loose impediment on the side of on the 15th hole during the Saudi International. Photograph: Ross Kinnaird/Getty Images

The sight of spectators pushing a rather large rock so that Brooks Koepka could play his shot during the Saudi International brought back memories of a similar hands-on effort from fans who assisted Tiger Woods in moving an even larger boulder at the Phoenix Open years ago (in 1999 if you must know).

As commendable as the feat of actually finding spectators at the thinly-populated inaugural tour event in Saudi Arabia to assist him, a higher mark should be awarded to Koepka for his awareness of the rules. He wasn’t in any breach in asking for such assistance in the physical moving of a so-called “loose impediment,” even if there was no way even he - the most-muscled bound of all players on the circuit - would have been able to manage to shift it on his own.

The point is that Koepka was well and truly aware of what was allowed under the rulebook, which is a lot more than many of his colleagues on tour seem capable of doing at this present time with the implementation and revision of rules to make the game less complicated.

Since the rules were reduced to just 24 on January 1st, the sport - certainly on the men’s professional circuits - has witnessed multiple infringements with one rule in particular (that of Rule 10.2b(4) which prevents a caddie standing behind a player for any reason) proving controversial, especially in the locker-room. It started with Haotong Li’s penalty for such an infringement on the 72nd green of the Dubai Desert Classic and surfaced again with a two stroke penalty (later rescinded on review) to Denny McCarthy in the Phoenix Open.

There have been cries and shouts about the unfairness of the rule, one which - actually - came to light due to actions on the women’s professional circuits where caddies (often taking an eternity) came to lining up their players on all shots, not just on greens, as part and parcel of the routine. It is ironic, in its own way, that it is the men whose actions have actually highlighted the new ruling and its implementation.

Many players have made known their dislike of the rule. Lee Westwood, for one, posted this observation on social media: “I’m going to have to sit down and read the golf rule book this weekend. I don’t know the rules anymore! I still have to get the white ball into the little white hole right???”

While Chris Paisley made the remark, “this new rule is a farce.”

Except, it isn’t a farce.

And Westwood is right on one point, it is about time he - and other players - actually took out the rulebook and learned the rules.

It is not rocket science!

All it would take is a couple of hours when waiting in an airport or on one of those long-haul flights that are part of any tour player’s regime to get to grips with what is and isn’t allowed on the golf course.

The case of Sergio Garcia’s scuffing of shoes and slamming of clubs into the greens in Saudi Arabia, which led to his disqualification, is a totally different matter altogether and more to do with misconduct than any ignorance of the rules.

But, as far as the understanding of rules are concerned, it is up to the players themselves to know what is and isn’t allowed. And remember, just as Woods did two decades ago, and just as Koepka did a week ago, there are times when it actually pays to know the rules and to make them work in your favour.