Out of Bounds: memories of John Daly as the long game gets longer 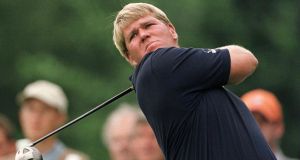 Wasn’t it John Daly who first grabbed our attention for his grip-it-n-rip-it philosophy? From the time he first broke onto the scene with his long-hitting exploits to win the 1991 US PGA, with television beaming his mind-blowing long drives to those of us watching agog, an on-going fascination with such length off the tee has gripped us all.

I remember watching Daly’s antics from a distance, actually from the comfort of the clubhouse of the Ballybunion Golf Club which happened to be playing host to the Irish Ladies’ Close at the same time. For the record, Claire Hourihane beat Eileen Rose Power (or McDaid as she was then before her marriage to Eddie) in that final and the contrast between Daly’s monstrous hitting was stark with how the two women expertly crafted a way through the dunes.

Daly’s big-hitting, though, was unlike anything that we’d ever witnessed. Ironically, given his reputation back in the day, almost three decades ago, he wouldn’t be mapped on the current professional circuits where a combination of factors - improved club technology, advanced ball technology and heightened fitness and strengthening levels - have seen distances off the tee increase year-on-year.

Which brings us to the report released this week by the R&A and the USGA which contains driving-distance data from the main men’s and women’s professional tours around the world. The aim of the report is to monitor trends in driving distance and the upshot is that there has been a gain of 1.7 yards in the past 12 months compared to the three yards increase the previous year.

Perhaps, finally, that would indicate a slow-down of sorts. Perhaps. But, then, perhaps not. It’s just that things have advanced to such a stage these days that increases will be smaller in margin simply because players are hitting the ball so far.

It is worth noting the advances since the statistical trends first started back in 2003. Back then, the average drives on the European Tour were 286.3 yards and 285.9 on the PGA Tour in the United States. Those numbers have risen (in 2018) to 294.7 on the European circuit, and to 296.1 on the PGA circuit.

From those figures, it is clear that the effect of better clubs and balls hasn’t impacted to the same level as it has for players on the professional circuits. However, the R&A and the USGA are happy that things haven’t gotten out of control and don’t envisage bringing in any new limits on club or ball technological advances although promising to remain “vigilant” on the matter.

In its joint review, the rules governing bodies say: “The R&A and USGA continue to believe that the retention of a single set of rules for all players of the game, irrespective of ability, is one of golf’s greatest strengths . . . in the current circumstances, the R&A and the USGA are not advocating that the Rules relating to golf ball specifications be changed other than to modernise test methods.”

So, whether you’re on the pro circuit, an elite amateur or a club hacker, the message is the same to one and all. Continue to give it a lash . . . in the tradition of JD! In other words, grip-it-n-rip-it.