What can we expect from Tiger Woods in 2019? 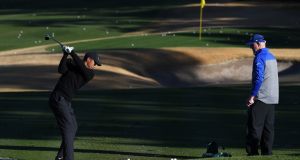 It was last August that Paul Dunne posted a photo on his twitter feed that was very much tongue-in-cheek but which underscored the effect Tiger Woods has on the sport. “They here for me or Tiger?” asked Dunne, accompanied by an image of spectators packed like sardines into a tin can. Quite literally, the crowds were so big that there was nowhere to move.

That photo came during a weather delay in the US PGA Championship at Bellerive, where Woods – who’d started his 2018 season at the Farmers Insurance Open this time last year ranked 539th in the world – contended like his old self and there was a giddy anticipation, and a genuine realisation, that his comeback from spinal surgery was for real.

Dunne was just a whippersnapper when Woods prowled the fairways as the world number one and most dominant player of his or any era, yet there was something about the atmosphere in St Louis that transcended generations and reaffirmed how Woods can move the dial like no other when it comes to golf.

Now, there is a renewed sense of anticipation as Woods – now ranked 13th in the world – again makes his seasonal debut at the Farmers Insurance Open at Torrey Pines, a place which has provided so many highlights for the player, and spectators too, throughout his career. Woods is a seven-time winner of the FIO and, to boot, also won the US Open there in 2008.

That US Open win was actually the last of his 14 Major successes; and, if there was a time when we wondered if he would ever win another, given his injury travails with knee and spine in the interim, it is fair to say that any such doubts have gone and there is again a renewed sense of expectation.

Woods’s last competitive appearance out on tour (disregard the Hero World Challenge if you will) was at the PGA Tour’s season-ending Tour Championship, which he won. After that, came the Ryder Cup which was a whole different kettle of fish. He was plainly exhausted and not himself for that one. So, really, his last outing of note was that Tour Championship back last September and we can only trust that he has wintered well.

Returning to competition on a favoured hunting ground is a wise one. On Tuesday, he played a practice round with Jordan Spieth and recounted a snippet of conversation which had taken place between the two:

“How long have you been coming here?” asked Spieth.

And that says so much about Woods and the impact he has had through his career. What wasn’t remarked upon was that Woods, at 13th in the world rankings, has now moved clearly ahead of Spieth, once seen as the pretender to his crown, who is ranked 20th.

For Woods, this is a new season that doesn’t have any of the doubts which were part of his psyche this time last year. As he put it, “I know what my body can and cannot do. Last year was very fluid, and it was like trying to hit a moving target . . . . it was quite interesting trying to figure it all out as the year progressed and it evolved. This year, I have a great understanding of what I can and can’t do. There’s not uncertainly that I had going into the year last year after what I did at the end of last year.”

Sounds like we’re in for an interesting old season, with Woods – just like the old times – the centre of the golfing universe.

Injury to Marcus Rashford adds to the need to bring in new faces 20:45
Stephen Scullion completes marathon journey to Tokyo 20:30
Corofin combine total football with dark arts for three-in-a-row 20:03
Salah seals the deal as Liverpool see off a dogged Man United 18:39
Connacht huff and puff but Montpellier pull away at the end 18:36
Here is your handy guide to sport on television this week