And they have some stories to tell about crucial swing matches 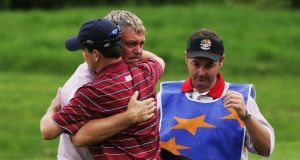 Over its last three decades, the Ryder Cup has been so finely contested that the destination of the cup often hinges on a particular singles match late on Sunday afternoon. It’s a match that can go either way.

“You hate to be the swing match,” admitted the former USA Ryder Cup captain Curtis Strange.

The “swing match” was exactly where Eamonn Darcy and his caddie, Guy Tilston, found themselves at Muirfield Village Golf Club in Dublin, Ohio, in 1987. Europe led going into the singles, 10½ to 5½, but the team’s big guns, including Nick Faldo, Ian Woosnam, Sandy Lyle and José María Olazábal, were felled in the opening matches.

The score was poised at 12-11 when it came to Darcy’s match. He had never won in 10 previous starts in the competition. He was playing against Ben Crenshaw, a recent winner of the US Masters, and they were tramping around a course designed by America’s captain, Jack Nicklaus.

Tilston remembers the partisan atmosphere: “Jack got the wives together to rally the crowd. They went cheerleading, trying to get the American fans to out-sing the Europeans. They had them singing, ‘Ben, Ben, he’s our man. If he can’t do it, no one can!’”

Crenshaw famously broke his putter, “Little Ben”, as he came off the sixth green. He had to putt with a one-iron, or sometimes bladed a sand wedge, although the improvisation did little to put him off his stroke on the back nine – he won four out of five holes to claw back a three-hole deficit and lead by one playing the 17th.

“Crenshaw was holing everything,” recalls Tilston. “Darcy was a bag of nerves, to be honest. To lose a three-up lead, and lose the match to a guy with no putter would have been hard to take.”

Darcy managed to stitch a six-iron from 196 yards on the 17th, however, to make it all-square going down the last. Both players found the bunker short left of the 18th green, but Crenshaw had played a shot more en route. He got up and down, leaving Darcy with golf’s most dreaded putt – short, downhill with plenty of break – to win the match. He may as well have been putting from the roof of a VW Beetle.

“It was a horrible, curly one downhill,” says Tilston. “There was about two feet of break left to right, and as fast as you’ll ever come across. It was all in the pace. You’d probably three-putt it more often than you’d hole it.” Darcy drained it, and Europe were on their way to a first Ryder Cup win on American soil.

“When you’re on the 18th fairway at The Belfry, you’re actually looking up, and hitting into a bank,” says Byrne. “There’s at least 10 yards in elevation from the top to the bottom of the green. It was just over 200 yards to the pin. The wind was going right to left so Christy was cutting it into a headlong wind. All in all, it was about 225.

He nailed it. The ball, which flew with trademark low trajectory honed from playing links golf in his youth, pulled up about five feet from the hole. Couples ballooned his approach right of the green, a shot which cost him the match. The teams tied 14-14, which was enough for Europe to retain the cup. A plaque has been installed on the 18th fairway to mark the spot where O’Connor Jr rifled his two-iron.

Pádraig Harrington showed stiff mettle in his maiden Ryder Cup appearance at the “Battle of Brookline” in 1999. He had a grinding battle with Mark O’Meara, who had won the US Masters and British Open titles the year beforehand, in the singles, during a day of infamy in Ryder Cup history – golf’s unfortunate approach to fashion reached a new nadir with the American team’s burgundy shirts, which were peppered with portraits of victorious American Ryder Cup teams from the ages. Europe took a four-point lead into the singles but the Americans rallied, leaving Harrington in a decisive match.

“At the 14th, a par five, O’Meara hit what we thought was a good wedge shot into the green, but it took an enormous bounce and went into the back trap. Pádraig went up to test the surface of the green to see how firm it was, and then walked all the way back down again to the fairway to the boos of the American crowd. It was viewed as bad sportsmanship by the Americans, that he was slow playing. It didn’t put him off. He was attracting more attention to himself when all you would want to do is hide.

“We were instructed by our captain Mark James not to look at the scoreboards on Sunday. But it was hard not to realise that things were not going well when you could see more and more of the American and European players coming to our match. We deduced our match was becoming the critical one because to all intents and purposes Olazábal was winning his match behind against Justin Leonard. All the focus was put on ours – this was for the Ryder Cup. That was the scenario at the time of playing.”

Harrington eked out a win by one hole, but Europe came up short, losing 14½-13½. Olazábal squandered a four-hole lead to halve his match with Leonard.

“It all went belly-up for José,” says McNeilly. “For about half an hour in the locker room afterwards, you couldn’t go near him – the guy was so upset.”

Emotions ran high that year in Massachusetts, although Billy Foster – who caddies for Lee Westwood at next week’s Ryder Cup in Gleneagles, marking his 12th outing in the tournament – says the 1991 Ryder Cup at Kiawah Island was the most hostile he has endured. He cites 2006 at The K Club, Straffan, Co Kildare as “the most enjoyable.” It was the last of five Ryder Cups he caddied for Darren Clarke, only weeks after Clarke’s wife, Heather, had died from cancer.

“He holed a 40-foot putt on the 10th and a 100-foot putt on the 12th to go four up. The highs were so high. He was above the clouds and I was holding the strings trying to pull him back down. You can’t believe for a minute the emotional rollercoaster he was going through.

“He was on such a high at that stage, by the time we got to the 13th tee I took him to one side and said, ‘Take an extra minute over this tee shot. Just get yourself back down to earth.’ It was tough to keep his focus and get him over the line.”

Clarke closed out Johnson on the 16th, winning three points from three matches in a European landslide victory.

“What a Ryder Cup,” sighs Foster. “It was the best Ryder Cup there will ever be.”