No fans, no problem as far as Tiger Woods is concerned in San Francisco 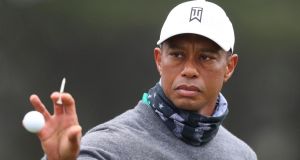 Tiger Woods catches a ball during a practice round prior to the 2020 US PGA Championship at TPC Harding Park in San Francisco. Photograph: Tom Pennington/Getty Images

Incongruous though it may seem for a sportsman whose most famous successes have been against the backdrop of euphoria among galleries, Tiger Woods has shrugged off any sense the lack of spectators at the first Major of 2020 might affect his game mode. No fans, no problem as far as Woods is concerned before the US PGA Championship starts on Thursday at Harding Park in San Francisco.

Woods has made only one competitive appearance on the PGA Tour since it resumed in closed-doors format. After a promising start, he struggled in the Memorial Tournament at Muirfield Village. Rory McIlroy has been candid about his struggles with concentration in events minus spectators.

“As far as the focus part of it, I haven’t had a problem with that,” said Woods. “Those four [Memorial] rounds, I was pretty into it. It’s different than most of the times when you go from green-to-tee, people yelling or trying to touch you. That part is different. As far as energy while I’m competing and playing, no that’s the same. I’m pretty intense when I play and pretty into what I’m doing.

Woods delivered a broad smile and characteristic “of course” when asked if he can prevail at Harding Park. If he does, he will secure his 16th Major win in his 21st US PGA appearance. From a disrupted golf year – a trio of Majors are now scheduled to be played by mid-November – the 44-year-old set fresh targets.

“I’ve been trying to prepare for the three,” Woods said. “Trying to figure out my schedule and training programmes and playing prep and the things I need to work on for each Major venue. It’s just in a different calendar order and different time of year.

“This is a big run for us coming up here. I’ve been gearing up for this, and looking forward to the challenges of not only this week, but obviously the [FedEx Cup] playoffs and a US Open and then the Masters.

“I haven’t played that much, but with the results that I’ve seen at home I’m very enthusiastic about some of the changes.” He was unwilling to discuss the detail of these alterations.

Woods will have McIlroy and Justin Thomas for playing company on the first two days. An early tee time on Thursday (8.33am; 4.33pm Irish time) will divert eyes towards Woods’s physical condition. As he continues to manage a back which has undergone multiple surgeries and still, by Woods’s own admission, is prone to regular stiffness a cold California morning may not be ideal.

“For me when it’s cooler like this, it’s just about making sure that my core stays warm by layering up properly,” Woods said. “I know I won’t have the same range of motion as I would back home in Florida where it’s 95 every day. That’s just the way it is.

“Talking to some of the guys yesterday, they were laughing at their TrackMan numbers already. They don’t have the swing speed or ball speed they did last week. It’s just the way it is. It’s going to be playing longer. The ball doesn’t fly very far here. We knew that coming in. I think the weather forecast is supposed to be like this all week; cool, windy, and we are all going to have to deal with it.”