Sporting Cathedrals: History and tradition palpable at St Andrews, the Home of Golf 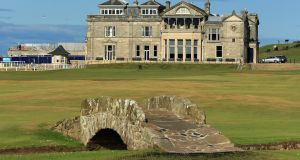 The Swilcab Bridge on the par 4, 18th hole on the Old Course at St Andrews. Photograph: David Cannon/Getty

The old graveyard at the top of the town of St Andrews is worth a visit, if only to underscore the rich golfing history of this university town. Look and you will find. The names on the headstones reach back through the years. Willie Auchternlonie. Allan Robertson. Old Tom Morris, a plain burial place. His son, Young Tom Morris’s not so.

The plot features a statue of the young fella taking a stance with the club in hand; and, strewn on the ground, are many dozens of wooden tees brought to his final resting place by golfing pilgrims from around the world.

St Andrews is the so-called Home of Golf and nowhere is more spiritual, in a golfing sense, than the Old Course itself. It might not be the toughest links on the British Open’s rota, and it certainly makes for difficult viewing for spectators, given that vantage points are effectively limited to one side of a given hole due to double fairways and double greens, but there hangs in the air a mystical presence of the game’s greats, ghosts of the past but not gone.

In winning by eight strokes over Thomas Bjorn and Ernie Els in 2000, Woods managed to avoid the Old Course’s 112 bunkers through all four rounds

The R&A clubhouse sits aback of the 1st tee and the 18th green, its grey walls and glass windows an imposing presence of its governance over the sport, while across the road the golf museum is indeed a throwback in time. The game’s origins are wonderfully documented, if that’s your thing.

To play the Old Course should be on every golfer’s bucket list. To visit St Andrews when the Open Championship is in town (next date is 2022 for its 150th staging) is another bucket list box to be ticked. St Andrews is synonymous with the British Open although the championship initially was played on another Scottish links courses – that of Prestwick, for no fewer than 12 straight times – until its first staging on the Old Course in 1873. It has now staged the championship 29 times, more than any other links.

Each one of those 29 Opens at the Old Course had a story to tell, but some stand out more than others. Let’s take Bobby Jones, for starters. Jones would, in time, join US founding father Benjamin Franklin as a freeman of St Andrews, but his first appearance in the Open at St Andrews ended in ignominy when, in the third round, he took four attempts to escape a bunker on the 11th hole and proceeded to rip up his card in anger. Six years later, the legendary amateur, who’d won the claret jug at Royal Lytham in 1926, returned to the Old Course to successfully defend his title.

Jones would prove to be a main influencer in Jack Nicklaus’s love affair with the Old Course. “I remember I used to go down to Bob Jones’s cabin before the Masters every year and he talked a little bit about St Andrews. And the one thing he said, ‘you know, your golfing career as a champion is not complete unless you win at St Andrews’. And I always had that in the back of my mind. Actually, it was in the front of my mind,” recounted Nicklaus.

In fact, Nicklaus won two of his three British Opens on the Old Course, in 1970 and 1978. “The Old Course to me is a very special place just because of what it is, where it is, how it sits here and how it relates to the history of the game of golf. that’s what’s special. I suppose if you took St Andrews and put it somewhere else it would be another golf course. But because it’s here, because of what it is and what it meant to the game of golf, it becomes something very, very special,” said Nicklaus.

The connect with the past wasn’t lost on Tiger Woods either, and it was entirely fitting that he would seal his own place in history when conquering all-comers in the 2000 Championship on the Old Course. That championship marked the millennium and the crowds – a record 239,000 over the week – were given a masterclass by Woods, who at the age of 24, became the youngest player to complete the career Grand Slam and joined Hogan, Nicklaus, Gene Sarazen and Gary Player in that elite club.

In winning by eight strokes over Thomas Bjorn and Ernie Els that year, Woods managed to avoid the Old Course’s 112 bunkers through all four rounds. “I got lucky a few times . . . it happened to hop over a bunker and catch a side and kick left or right of it, little things like that. It happens. Fortunately for me, it was happening that week,” said Woods.

Those bunkers are an integral part of the Old Course. Their names resonate. Hell. Coffin. Spectacles. And none more famous than the Road Hole bunker, that deep and steep-faced sand trap by the 17th green. If a modern golf course architect were to suggest hitting a blind tee-shot over the corner of a hotel to reach the fairway, he’d likely be laughed out of town. But that is exactly the shot required on the Road Hole and it has earned a statistical reputation as the hardest of all holes on the Open rota, accounting for six of the most difficult of the 10 most difficult played since 1982.

It is special to thread in the footsteps of legends, and the beauty of golf is that it is a sport that allows players, regardless of handicap, to do so. My own opportunity to play the Old Course came by the luck of the draw, quite literally: it was 2002 and, at the American Express Championship in Mount Juliet, Ernie Els was asked to draw out two names to play in the Alfred Dunhill Links. Mark Garrod was one. I was the other.

My original partner was due to be Alex Cejka, a winner on the European Tour. But he was forced to withdraw with a back injury and, in his place, I was teamed-up with Chris Gane, an English professional struggling to retain his card having missed 14 of 26 cuts that season. The other players in our fourball were Thomas Levet and American broadcaster Peter Kessler.

The Old Course has left its mark on many a player of greater ability than me through the years. Jones of course ripped up his card on his first visit. Nicklaus took four shots to get out of Hell in the 1995 Open. In the 1978 Open, Japan’s Tommy Nakajima putted his ball from the green into the Road Hole bunker. He took four attempts to get back out. Had he lost concentration? “ No, I lost count,” he replied, and the bunker was given the moniker of the Sands of Nakajima.

As it happened, bunkers weren’t my problem. After a good drive down the first, my caddie Richard – who has been a caddie on the Old Course for 18 years and has told me he knows every “bump and hollow” – is under the misapprehension that providing yardages will help. “You’ve got 139 yards to the flag but with that wind it will play more like 160. Punch in a six-iron, that should get your there.” It got me there alright, but not to the green. My ball joined those of history which found the burn that lurks in front of the green.

Others have fared worse, admittedly. In the 1995 British Open Ian Baker-Finch was paired with Arnold Palmer in the King’s last ever appearance in the championship. Baker-Finch’s game was in the horrors to the extent he’d had a nightmare the previous night that he had hooked his first drive out of bounds. What happened? His nightmare became reality.

On the fifth hole, a par 5 of just over 500 yards off my tee, a decent drive and a five-iron lay-up had me well positioned. After my third shot, Richard turned to me. “Do you know,” he said of the fifth green which also doubles with the 13th, “That’s the biggest green in the world, it measures one and a half acres, and you’ve managed to miss it with a wedge.”

By the time we walked over the Swilcan Bridge and reached the 18th green – no visit to the Valley of Sin – there were spectators in the grandstand. I managed to hole a 15-footer for a par and, on leaving the green, Dai Davies – the veritable golf correspondent of The Guardian – comes over to me. “Do you realise you’ve just been applauded on the 18th green on the Old Course at St Andrews?”

The demand to play the Old Course is huge but it remains accessible, either through advance bookings by authorised providers of tee-times or by registering (48 hours in advance) for the daily ballot. Please note, golfers “should wear attire appropriate to the sport and clothing should not be scruffy or torn”.

The 150th edition of the British Open was due to be staged at St Andrews next year but, due to the cancellation of this year’s championship planned for Royal St Georges, it has been pushed back to 2022. It should be something special, at the Home of Golf; another part to its storied history.