Rory McIlroy, Shane Lowry and Graeme McDowell all in action at WGC event in Tennessee 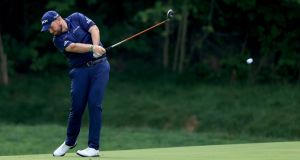 Shane Lowry has missed three cuts in five events since the resumption of action on the PGA Tour. He will be in action at this week’s WGC event in Tennessee. Photograph: Andy Lyons/Getty Images

Rory McIlroy, Shane Lowry and Graeme McDowell all return to action having each taken a two-week break from the PGA Tour to play in the World Golf Championship (WGC) FedEx St Jude Invitational at TPC Southwind in Memphis, Tennessee.

The world number two, McIlroy – he lost top spot to Jon Rahm following the Spaniard’s victory at the Memorial tournament – will be looking to recapture his sparkling early season form that saw him win the WGC HSBC Champions tournament in China last November, while also finishing in the top five in eight successive PGA Tour events.

Since the Tour resumed in June his best performance came at the Travelers Championship, where he finished in a tie for 11th place. At that point he’d played the previous two weeks in the Charles Schwab Challenge (T32nd) and RBC Heritage (T41st). He took a fortnight off from tournament play to work with his coach Michael Bannon before teeing it up at Muirfield Village where a frustrating final round 78 saw him tumble down the leaderboard to a tie for 32nd place.

Sundays have been a bit of an issue of late with final rounds of 70, 74 and 78 thwarting his ambition; a 67 in the Travelers bucking that trend. Examining some of his post-round comments during that four-tournament swing, he was unhappy at various stages with his driving, putting and wedge play.

Certainly for a golfer who is rightly celebrated for his power and accuracy off the tee, his current driving accuracy percentage statistic of 58.45 (ranked 151st) wouldn’t be anywhere near the standard he would demand. To mix sporting metaphors he’s been lightly raced in the last month – this week represents only his second tournament in that time – and it will be interesting to see if he’s ironed out any swing gremlins.

Lowry too is searching for form after three missed cuts in five events since the resumption of the PGA Tour, including last time out at the Memorial tournament, means that the British Open champion is seeking a little playing rhythm. There is no cut in the elite field of 78 players this week.

The Offaly man finished in a tie for 29th place in the last WGC event in Mexico. He too has suffered from a small dose of the weekend blues in the two tournaments in which he’s made the final 36 holes, albeit on the Saturday when he’s signed for a pair of 74s. He is set to be reunited with his regular caddie Bo Martin in Tennessee.

McDowell will also be looking to step up on recent performances, the 40-year-old has only made the weekend once in four tournaments since June. It is not just the Irish contingent that is looking for green shoots in performance terms as this week’s defending champion Brooks Koepka has missed the cut in two of his last three tournaments.

Indeed the American would dearly love to find form at Southwind because the following week is the season’s first Major of the year, the US PGA Championship at Harding Park in San Francisco, the tournament that Koepka won last year.

Nine of the world’s top 10 players will be in action this week, the exception Australia’s Adam Scott, who has yet to return to tournament golf since the coronavirus kicked in. Tiger Woods is another absentee while there is some doubt about the fitness of Dustin Johnson who, having shot a 78 in the first round of last week’s 3M Open, withdrew because of a back issue.

England’s Lee Westwood, tournament host at the recent British Masters won by Italian Renato Paratore, won’t be travelling to the USA in the foreseeable future due to the pandemic.

West Waterford’s Séamus Power is in the field for the Barracuda Championship at Tahoe Mountain golf club this week. His decent form of late was undermined by a second round 78 that saw him miss the cut at the 3M Open.

The British swing on the European Tour moves to the Forest of Arden golf course this week for the Hero Open and there will be four Irish players in action; Jonathan Caldwell, Paul Dunne, Cormac Sharvin and Gavin Moynihan.

The 36-year-old Northern Ireland golfer Caldwell finished in a tie for eighth place at the British Masters, earning the biggest cheque (€27,420) of his European Tour career along with 47 Race to Dubai points, which elevated him to 108th in the standings. There are 10 spots available for the US Open at Winged Foot in a self contained order of merit following the first five events of the British Swing.

Dunne, playing in his first event for nine months following wrist surgery, managed a share of 38th place (€6,826) while Sharvin and Moynihan missed the cut.