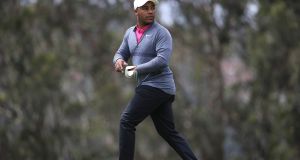 The magic number – that of 59 – teased a number of players in the first round at the Wyndham Championship at Sedgefield Country Club in North Carolina, only for it to prove an elusive goal as Harold Varner III, Tom Hoge and Roger Sloan all signed for 62s to share the first round lead in the final regular tournament of the PGA Tour’s season.

The trio were two shots ahead of Harris English while Wesley Bryan led a large chasing group in fifth which included former Masters champion Patrick Reed with a five-under 65.

The top 125 players on the FedEx Cup rankings after the tournament advance to the playoff series, but it was that possibility of a sub-60 that briefly came into the minds of players heading down the stretch . . . except, in Varner’s case, he didn’t realise that he was so close!

A native of North Carolina, but without the home support due to the behind-closed-doors policy in place on tour due to the Covid-19 pandemic, Varner was eight-under on his round as he headed to his 16th hole of his round.

“Dang, I wish I would have [known]. I didn’t think about it at all, just trying to birdie every hole. You can go get it out there, obviously, with the scores, so I just knew that, you know, the gas pedal is on the right . . . . I wish I would have thought about (59), just to get some more goosebumps.”

Hoge had the best chance to reach the magic number, requiring birdies on his final two holes.

“I thought about it,” he admitted afterwards, “but knew I had to find the fairway on the 17th and I didn’t, I found the rough.”

Hoge parred that penultimate hole and then suffered a bogey on his closing hole to also sign for a 62.

Graeme McDowell suffered a horrible start, with a double bogey six on the 10th, his opening hole, where he missed the green right with his approach and then three-putted the putting surface. In all, McDowell, who is assured of advancing to the FedEx Cup playoffs, had two birdies, three bogeys and that double-bogey in his 73 and faces a fight to survive the midway cut.

For world number seven Brooks Koepka, it proved to be another frustrating round following on from his poor final round showing in the US PGA.

Koepka – struggling with injury to his left knee – suffered four bogeys in an opening round 72 and admitted to feeling “pretty flat” after a long stretch of tournaments.

“You know, being in contention the last two weeks playing, what, my sixth week in a row, I’m a bit tired to be honest. So, I definitely came out flat,” said Koepka, referring to his position on the FedEx Cup standings as he attempts to make it all the way to the Tour Championship in Atlanta.

Koepka, currently 92nd on the FedEx Cup points, with the incrementally reduced fields – from 125 to 70 to 30 by the time the series reaches East Lake – added:” I’d like to be in Atlanta, that’s the whole reason we’re playing, to see if you can better yourself or if it makes next week a whole lot easier.

“You never kind of want to be on that bubble, behind the eight-ball. Usually we don’t start playing until March and obviously right around The Players [the shutdown came] and then with the injury before, so it’s kind of like six months of not really playing. So I’ve kind of had to make up for it, but I’ve got no other option.”

Shane Lowry, in 131st spot heading into the Wyndham, and needing to move up inside the top-125 to make the FedEx Cup playoffs, was two-under par after an opening round of 68.

The Offalyman turned in 32, with four birdies – on the first, fifth, sixth and eighth holes – and a lone bogey on the fourth.

Séamus Power, like Lowry trying to break into the top-125 on the points list, was also two under par through 16 holes of his first round when play was suspended due to inclement weather. The Irishman was on of 33 players still on the course.

First round scores in the Wyndham Championship (USA unless stated, par 70)