Course devoid of woodland but reminiscent of links terrain, although without the rough 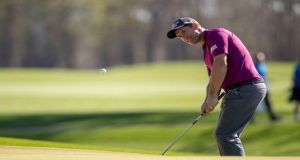 The course: The tournament moves to a new venue this year, the course at Trinity Forest – Par 71, 7,380 yards – providing a different challenge to the previous host venue at the Las Colinas resort in Irving.

The course is designed by former US Masters champion Ben Crenshaw and his associate Bill Coore, but (despite its name) does not feature any woodland. It is more reminiscent of links terrain, although without rough. Its real defence is the undulating greens and run-offs which makes precise approach iron play and short game key components for a potential winner. Greens are anticipated to run no higher than 11 on the stimpmetre.

Talking Point: It’s going to be hot, hot, hot . . . with temperatures set to reach the mid-to-high 30s through the entire tournament, hydration and rest will be an important factor for players. As local resident Jordan Spieth observed, “(recovery), doing the tech boots and rehydrating every night and make sure you wake up feeling fresh .”

Irish in the field: Three of them, all in need of FedEx Cup points: Séamus Power (first round tee-time 1.40pm Irish time) Pádraig Harrington (6.30pm), and Graeme McDowell (6.50pm).

Quote-Unquote: “When someone plays it, they’re kind of scratching their head on it a little bit” – Hunter Mahan, who is a member, on the unique demands of the course.

Betting: Jordan Spieth has not won since last July but the world number three – who is also a member at the club – is a tightly priced 4/1 favourite to end that drought, on the theory his familiarity will be a huge benefit. But another Texan, Jimmy Walker, comes in on the back of good form – fourth and tied-second in his last two outings – and is more tempting at 16/1 while Aaron Wise, runner-up at the Wells Fargo on his last outing, is worth an each-way look at 33/1.