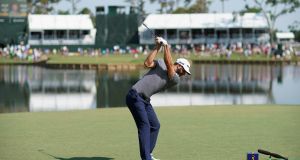 Dustin Johnson signalled his intention to maintain his status as world number one with an opening 66 in the Players Championship at Sawgrass.

Johnson’s position at the top of the rankings, which he has held since February last year, is under threat from Justin Thomas, Jon Rahm, Jordan Spieth and Justin Rose this week.

But the former US Open champion is not about to make life easy for his rivals and carded six birdies in an error-free first round to share the lead with compatriots Webb Simpson, Chesson Hadley, Matt Kuchar and Patrick Cantlay and Sweden’s Alex Noren.

Rose and Rahm are just two shots off the lead after rounds of 68, but Thomas could only manage a one-over-par 73 and Spieth struggled to a 75 which featured four bogeys, a double bogey and an eagle on the short par-four 12th.

“I haven’t had the best record here but it’s a golf course that I like, I enjoy playing it and I feel like I should play well here,” Johnson said after his lowest score and first bogey-free round at Sawgrass in 31 attempts.

“My expectation is the same for every tournament, I want to play well and put myself in a position to have a chance to win on Sunday.”

Asked about the world ranking situation, Johnson added in a post-round interview broadcast on the PGA Tour’s Twitter account: “Justin [Thomas] has been pretty close to me for a while. Every week I know there’s a chance that someone can pass me.

Rory McIlroy’s opening round on the Pete Dye-designed course was, as it has been throughout his career, a mixed bag. McIlroy found water, sand, rough and dirt in a topsy-turvy, adventurous round, yet still managed to sign for a sub-par round, a one-under-par 71.

Former champion Sergio Garcia held the lead on seven under par before dumping his tee shot on the par-three 17th — where he made a hole-in-one in the first round last year — into the water to run up a double bogey, with a bogey on the last leaving the Spaniard on four under.

But the marquee group of Tiger Woods, Phil Mickelson and Rickie Fowler fared even worse, Woods carding an eagle, two birdies and four bogeys in a level-par 72, Fowler returning a 74 and Mickelson a nightmare 79 after playing the last five holes in seven over par.

Unfortunately for Shane Lowry, a strong start – birdies at the 12th and 13th – was undone by water trouble on the 14th, where he ran up a double bogey, and again at the 17th, where his tee shot came up short of the island green.