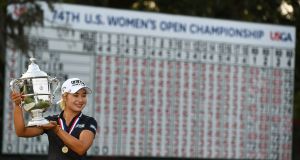 The tears that fell from Jeongeun Lee6 upon claiming victory at the US Women’s Open had a resonance way beyond joy. The South Korean broke down as victory was secured at the Country Club of Charleston – as, endearingly, did her translator during post-tournament interview duties – with family heartache the underlying theme.

Now 23, Lee6 was only four when her lorry-driving father, Jung Ho Lee, was left paralysed after a serious accident. Beyond the obvious challenges for the family at that time, Lee6’s amateur golf career subsequently required an abundance of journeys and hotel stays. Consigned to a wheelchair, Jung Ho Lee was still a regular at tournaments.

“By looking at my family situation back then, I thought about wanting to play golf because I wanted to support my family no matter what,” Lee6 said. “I told my family that I wanted to play on the LPGA Tour for a long time. I want to thank my family, who are in Korea watching me on TV and supporting me all the time. I couldn’t imagine it without you guys, with all your support.” The feeling, one presumes, is mutual.

Lee6 likes to be known simply as “Six” with the number an addition owing to the makeup of the Korean Tour. “There’s six different players who have the same name, Jeongeun Lee,” the champion said. “It goes by one, two, three, four, five, six. I’m the sixth Jeongeun Lee player, and that’s why they put it down as Jeongeun Lee6. But this is my lucky number too, so I would love to put down as Lee6 as my last name.”

Fittingly, Lee6 won at an aggregate of six under par in what is her rookie year on the LPGA Tour.

Earlier, she had grown disillusioned with professional golf in her homeland to the point where she wanted to stop despite seven victories. Her major credentials had been obvious; last year, she finished in the top 10 in two of them. A newly introduced qualifying series, which Lee6 won, allowed her to take her professional talents to the US on a full-time basis.

Lee6’s rounds of 70, 69, 69 and 70 sealed glory in Charleston by two from Angel Yin, Ryu So-yeon and Lexi Thompson. As more illustrious names wilted in the North Carolina heat, Lee6 had the cushion of being able to bogey two of her last three holes.

There appears no chance of Lee6 letting a $1m prize – boosted only last week – go to her head. “So my goal was, if I win the tournament, I can eat ramen,” she said. “That was my goal. If I finish the top five, I can buy shoes. But I can buy shoes and eat ramen. So it’s a double.”

A penny for the thoughts of Hank Haney, who caused outrage before the US Women’s Open: when asked who he thought would win the tournament, Haney had said he would “predict a Korean” and that he could not name six players on the LGPA tour unless he could “go with Lee” without a first name. The winner of the 74th edition of this major shrugged off the sentiment of Tiger Woods’s former coach. “I didn’t really understand him that much,” Lee6 said. “So I didn’t really think about it.”

Haney, who was suspended by his radio show at the request of the PGA Tour, had apologised for his comments but has since dug himself a deeper hole with a series of tweets that suggested Lee6’s victory had vindicated his prediction. “Korean women are absolutely dominating the LPGA Tour,” he wrote. “If you asked me again my answer would be the same but worded more carefully.”

The former world No 1 Lydia Ko finished in a share of 39th having failed to break 70 all week but did produce a hole-in-one, at the 11th on Sunday. Incredibly, this marked only Ko’s second career ace as a professional.