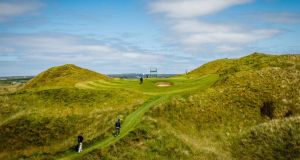 Ireland internationals Tiarnan McLarnon and John Murphy made their exit as the shocks continued in the Pierse Motors VW sponsored South of Ireland Amateur Open at Lahinch.

After Whelan beat leading qualifier Hugh Foley 3&2, Egan cruised to an emphatic victory against Murphy in his quarter-final to leave McLarnon as the only international standing following Peter O’Keeffe’s defeat to Foley in the morning.

But the Massereene man’s short-range putting proved his Achilles’ heel against Desmond, who was three up after 10 holes but then lost the 11th, 12th and 13th to birdies.

The Munster Students champion won the 15th to go in front again and while he escaped with a half in bogeys at the 16th as McLarnon missed from four feet, he lost the 17th to a birdie to go to the last all square.

His race looked run when he pulled his second close to the wall left of the 18th and McLarnon’s approach rode the right to left wind and finished 25 feet above the hole.

But Desmond played an audacious parachute shot to 18 inches to halve the hole in birdie, then won with a par at the 19th after McLarnon ran through the back and then missed a three-footer to extend the match.

“I am delighted,” Desmond said. “I didn’t expect it at all. I played really well against Paul Coughlan in the morning and was four or five under. And this afternoon it could have gone either way.

“On 18, he was going to make birdie so I thought I might as well go for the shot and it came off. It’s pretty cool to be in the semi-finals.”

Flanagan (23) was trailing Waterford’s Eanna Griffin after 10 holes but turned the match around to win 2&1 and now has a chance to win his second “major” following his 2016 North of Ireland triumph.

Whelan (24) reached the semi-finals of the “Close” at Ballyliffin in 2016 and the last four in the “West” in 2017 but he faces a tough match against 2016 South of Ireland semi-finalist Egan.

The Dubliner lost on the 19th in the semi-finals to eventual champion Stuart Grehan in 2016 and he’s in the running for a spot on the Irish team for September’s Home Internationals at Lahinch.

After a consistent campaign, he’s within striking distance of the top-three in the Bridgestone Order of Merit who gain automatic selection.