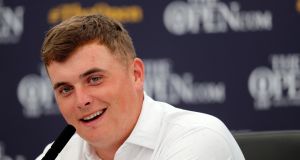 Lahinch rivalled the Battle of the Little Bighorn for the number of scalps taken on a day of carnage for the favourites in the Pierse Motors VW-sponsored South of Ireland Amateur Open Championship.

No fewer than nine of the leading contenders for the title made their exit on a day of 20mph southwest winds, with Amateur champion James Sugrue, title holder Caolan Rafferty and their fellow Walker Cup panellists Conor Purcell and Mark Power also biting the dust.

The favourite’s tag will now fall on the likes of Kinsale’s John Murphy (the only Irish player dropped from the Walker Cup panel when it was reduced to 16 this week), the in-form Peter O’Keeffe from Douglas, who was runner-up in the North of Ireland two weeks ago, and Newlands’ Jake Whelan.

“I am wrecked after the last few weeks,” said Sugrue, who played in the Open at Royal Portrush last week before heading to Royal Liverpool for Walker Cup practice. “I didn’t putt badly, but nothing really went in for me, and Jake’s a fine player. I came here to try and win but but such is life. I will have a rest now before the US Amateur.”

Whelan, 24, had not made a cut in a championship for 12 months until this week but, having reached the semifinals of the “Close” at Ballyliffin in 16 and the last four in the “West” in 2017, he’s a dangerous customer if he’s finding fairways.

“There was no pressure on me,” said Whelan, who chipped dead at the 18th for birdie before watching Sugrue’s eagle chip burn the hole to secure a one-up win having made a six-footer at the 17th to remain in front.

“But I was very much up for it, playing the Amateur champion the week after he’s just played the British Open. It’s been a full year of missing cuts in championships but I’d love to win one. That’s the goal.”

Defending champion Rafferty also bowed out in the afternoon, losing to a birdie four by 30-year-old Enniscorthy man Jason Rackard – the 6ft 7in grandson of the late Wexford hurling great Nicky Rackard – at the 20th.

“It was great to get a scalp like that,” said Rackard, whose Enniscorthy team-mate Paul Conroy meets Co Sligo’s Sean Flanagan for a place in the quarter-finals. “I had nothing to lose today playing Caolan.”

All square playing the 18th, Rafferty drove into sand and lost the hole to par, but, after making a 10-footer for a half in par at the 19th (where he had dodged a bullet in the morning by making a 12-footer to edge out Portmarnock’s James Temple), he found sand from the tee at the 20th and then missed the green with his third.

“Jason played good golf and made a lot of crucial putts towards the end,” Rafferty said. “That’s the way it goes. I was blessed to get through this morning and I have a niggle in my hip, so I may have to get that sorted – unless I get the call for Barton Shield in the morning!”

Power also lost in extra holes, falling to a par from beaten 2015 semi-finalist Keith Egan from Carton House at the 19th before fellow international Purcell lost on the 18th to Monkstown talent Sean Desmond (21).

“Conor is just a class player,” said recently crowned Munster Students champion Desmond, who took the lead after 11 holes and held on. “But matchplay is fickle.”