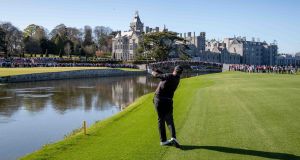 Shane Lowry in action during the JP McManus Pro-Am launch. The Co Limerick course has been redesigned with the Ryder Cup in mind. Photograph: Morgan Treacy/Inpho

What was it George Bernard Shaw said of secrets? “The only secrets are the secrets that keep themselves,” wrote GBS; and, for sure, it’s safe to say that even the dogs in the street knew that Adare Manor was the only gig in town when it came to being the host venue to stage the 2026 Ryder Cup.

Once businessman and owner JP McManus threw his hat into the ring, there was always only going to be one winner. In racing parlance, Adare Manor won by a distance, even if the rivals were never publicly disclosed as the PGA European Tour changed the selection process: the 2018 and 2022 venues, Paris and Rome, were effectively won in bidding wars (somewhat unseemly, as it turned out) and there was a more measured approach taken on this occasion.

In fact, it was the PGA European Tour who formally approached the Government with an invitation to attend last September’s Ryder Cup in Paris, which Minister for Sport Shane Ross, having initially declined, took up. In effect, once interest was established, that was the starting point in formal negotiations and discussions which ultimately has brought the event back to Ireland for the first time in 20 years, since The K Club held the 2006 match.

Although it was hoped to make the announcement back in March, some details remained to be worked out and, it is believed, final discussions took place during the recent Dubai Duty Free Irish Open at Lahinch with Thursday’s Cabinet approval rubber-stamping the deal that will see Europe and the United States match staged on the course by the River Maigue.

In terms of making the announcement, it couldn’t have been any better timed, coming just days after Shane Lowry’s magnificent win in the 148th British Open at Royal Portrush. Golf is currently headline news – not only in Ireland, but globally – and the marketing outreach for golf tourism in Ireland, especially in the American market, is one of the prime reasons why the Government put its weight behind getting the Ryder Cup back on Irish soil.

An economic report drawn up post-Paris indicated the financial worth of that match was in excess of €235 million, which was double what the match at Gleneagles in Scotland in 2014 generated. Some 270,000 spectators attended the match at Le Golf National during that Ryder Cup week and, with Adare Manor re-designed with the Ryder Cup in mind, with grandstands and a stadium course feel integrated into its layout, the expectation is that similar numbers will be accommodated for the 2026 match.

A pre-event economic impact study commissioned by Fáilte Ireland has put the economic benefit to Limerick and Mid-West region at between €90 million to €161 million, which may actually be on the conservative side.

Although the financial sensitivities of the deal were not disclosed in the announcement, it is anticipated that the Government’s input will be in the region of €50 million, given that there is also a commitment to increase the financial contribution to the DDF Irish Open (currently €1 million a year, through Sport Ireland) up to 2026 as well as holding a Staysure Tour (seniors) event and Challenge Tour events.

The Government’s expenditure comes in three parts: a licensing fee (to the European Tour), investments in those various European Tour events (2020 through to 2026) and also a marketing fee. The cost will also extend to infrastructural matters such as ensuring waste and sewerage as well as water is up to the required standards to meet the scale of the attendance, while it can be taken as a given that the long-awaited Adare bypass will finally get done.

The announcement may have come four months later than originally envisaged as negotiations dragged on until all the “I”s were dotted and “T”s crossed but, some seven years out from staging the match, it could hardly have been better timed given that the golfing eyes of the world are very much on Ireland at present, given the success of Royal Portrush and Shane Lowry’s great victory.

Given that Ireland is among a multi-nation bid for the Fifa 2030 World Cup, 2026 was the optimum year for staging the Ryder Cup here and the fact that the European Tour identified Adare Manor as its preferred venue – without getting in a crass bidding war – also made it likely to happen. The secret, if ever it were one, is finally out of the bag.