The making of an Open champion: Shane Lowry’s rise to the claret jug 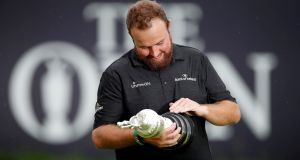 The script is one which took on a life of its own: the Claret Jug – the oldest, most famous piece of golfing silverware – was taken on a journey in a whirlwind week that, well, beat Banagher.

It left Portrush Golf Club at 9.20pm last Sunday night and, within hours, it was being supped from in 37 Dawson Street in Dublin city centre and its new owner was beating out the words of “The Fields of Athenry” when he wasn’t singing “My Little Honda 50”.

In the true GAA tradition of All-Ireland champions, it would visit the Boar’s Head in the morning and the Blue Light up in the foothills of the Dublin mountains in the evening on the Monday; House on Tuesday lunchtime and a number of watering holes in Clara, among them Christy Cowen’s and Baggots, that evening as the town paid homage to one of their own made great.

By Friday, the Jug had made its way to Temple Street Children’s Hospital before going on a tour of various blue-chip companies associated with the Champion Golfer of the Year. In all its years, since first it was presented in 1872 as a replacement trophy for the original belt which Young Tom Morris had been given after his third win in 1871, it’s safe to say it had never experienced the like before, for this was the week of weeks.

And just as he’d done in playing those 269 strokes that took him clear of all others in the 148th British Open, Shane Lowry had an infectious smile that made out like he was the happiest man on earth.

It was 10 years ago, in hosting a barbecue on the Tuesday ahead of the Irish Open at Baltray, that Conor Ridge – the founder of Horizon Sports agency – first got to meet Lowry, then a 22-year-old amateur who’d got an invitation to play in the European Tour event as part of the GUI national squad.

Lowry was only at the meat fest because he was friendly with players like Gareth Shaw and Jonathan Caldwell, who were then fledgling professionals and part of the Horizon stable at that time.

“It happened organically, there was no pitch, it was all very natural,” recalled Ridge of that first meeting, which led to a follow-up coffee and a chat with an offer of help whenever he turned professional. There was mention of the possibility of an invitation to a Challenge Tour event in Kazakhstan perhaps, later that year after Walker Cups etc were done with.

Of course, that never happened. By Sunday night of that week, Lowry’s world had moved in a new direction. “I won’t be needing that sponsor’s invite now,” quipped Lowry to Ridge after beating Robert Rock at the third hole of a playoff.

Lowry drove away from Baltray with the trophy in his Mitsubishi Colt and a handful of business cards from agents eager to be part of his future. But it was the man who’d invited him to the barbecue who would become his manager when he made the move, almost straight away, into the professional ranks with a full European Tour card and no need to get through Q-School or Challenge Tours or any other pathways to the big time.

“Anyone who can do what he did at 22 years of age, under that type of pressure with no previous experience, has obviously got something really special, and an inner mental fortitude and courage, resilience that nobody can teach you. You either have it, or you haven’t, and it goes right back to that Irish Open,” said Ridge of realising Lowry’s potential.

Someone the other day put it to Lowry of his capacity to “win big” in that his successes now include WGCs, Rolex Series and a Major in a career CV that would be the envy of many and yet with still so many years ahead of him.

But to get the highs, Lowry has also had to endure lows. Lowry himself recounted how he’d cried in the car park after missing the cut at last year’s championship in Carnoustie. But there were other times, before. Like the time when he missed the cut at the Open in St Andrews in 2015. “I remember putting my arm around him at the back of the 18th green. I told him, ‘I know it doesn’t feel like it right now, but golf gives back when you least expect it’. When it’s not going well, golf is one of the toughest sports in the world, it’s hard to see the light. But two weeks later he won the Bridgestone in Akron,” said Ridge.

And, now, Lowry has scaled the heights even further. He’s done it with a loyal team. His coach, Neil Manchip, has been with Lowry dating back to when he first got called up to the GUI boys’ squad. “Neil is way more than a coach, he’s his mentor, his psychologist to be perfectly honest, his friend, all those things. You can’t describe the relationship with one label, he’s hugely important,” said Ridge.

Robbie Cannon, an accomplished golfer with Irish Close and Irish Amateur Open titles of his own, is Lowry’s fitness performance coach (Lowry attributes him with adding an extra 30 yards to his game off the tee), while the addition of Brian “Bo” Martin as his caddie, less than a year ago, has reaped its own dividends (for both) with wins in Abu Dhabi and the big one at Royal Portrush.

Another hugely important cog in the wheel is Lowry’s player handler Brian Moran, who returned from London at the end of 2016 to take up the position with Horizon. “He puts a huge amount of time, energy and effort into the role to help Shane be the best he can on a number of different levels,” said Ridge of Moran, while other members of the backroom team include Angela Jones, who is contracted to look after travel and tour administration, while Pádraig O’Reilly is the guru who looks after Lowry’s financial affairs.

“Shane doesn’t need to change a lot from a personal perspective and it is important that he doesn’t, that he gets back to playing golf. Obviously this win changes his commercial world and the opportunities that now come with being a Major champion,” acknowledged Ridge.

Alan Lowry doesn’t mind admitting he had tears in his eyes as his big brother – by six years – moved ever close to laying claim to the Claret Jug on Sunday.

Although he was out on the course, part of the huge galleries urging Shane on, Alan had to be resourceful to work out what exactly was happening:

“It was mad. You couldn’t see most of the shots. I was texting Kate, my girlfriend, who was inside in the players’ lounge, actually watching with Pádraig [Harrington], to give me updates. I was following it on Twitter and WhatsApp and stuff . . . and then, after 16, I saw a photo on Twitter of the guy starting the engraving and then, that’s when it hit me, ‘wow, he’s going to win The Open’.”

Sport was very much part of the two brothers’ DNA growing up. Dad Brendan, of course, is remembered as part of that famous Offaly All-Ireland winning team of 1982 but their mother, Bridget, is part of the Scanlon clan. “My uncles, Mark and Colm, played for Offaly and played against Dad. Ferbane against Clara would be a big rivalry, and that’s where we get our competitiveness from.”

But golf proved to be their calling. “Myself, Shane and Da would go out to Esker Hills in the evenings and be playing for a fiver a man. Most of the time me and Shane would get so competitive that Brennie would just pip us and stuff like that. It was good, you remember those times. A competitive family environment I would say, a good environment to grow up in. Our family are very grounded, if you do get out of line they let you know it, especially my mother.”

Although an accomplished golfer himself, a winner of the Mullingar Scratch Cup and twice a member of Leinster interprovincial winning teams, Alan – who was part of the Paddy Harrington Golf Programme at NUI Maynooth – realised following the big brother into professional golf wasn’t going to be for him.

“If you’re not winning [national] events or getting on the Irish team or playing Walker Cup, in the amateur game that’s the level you have to be at to even think about going professional,” said Alan who went down the academic route instead and now works as a consulting analyst with Deloitte.

SRIXON
Lowry became a staff player with Srixon/Cleveland Golf in January 2010, which was his first six-figure sponsorship deal as a professional. He has used the Japanese company’s clubs and balls as part of a multi-year deal. Interestingly, the company made an exception in making a dedicated logo ball – featuring a green shamrock – for Lowry, something normally only given to the company’s Major-winning champions, among them Graeme McDowell. Lowry had only been using the logo printed ball for a month before becoming a Major champion in his own right.

BANK OF IRELAND
Lowry has had the bank’s brand on his heart since 2014, in a deal which was again renewed in 2017. The sponsorship is up for renegotiation at the end of the year.

IMMEDIS
Lowry is not only a brand ambassador since 2017 for Immedis, an Irish company which is a global payroll and taxation specialist – he is also a shareholder.

KINGSPAN
The Co Cavan-based multinational group has been on board with Lowry since 2017 (and recently added the Maguire twins, Leona and Lisa, to their client list). The company also sponsors Ulster rugby and holds the naming rights to Kingspan Stadium in Belfast and also to Cavan GAA’s Kingspan Breffni Park.

PADDY POWER
Although the name doesn’t feature on his clothing or his golf bag, Lowry is a brand ambassador for the betting group.