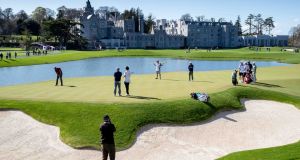 Pádraig Harrington putts on the 18th at Adare Manor as the 2020 JP McManus Pro-Am was launched. Photo: Morgan Treacy/Inpho

Within minutes of the formal announcement that the Ryder Cup would, indeed, be staged at Adare Manor in 2026, the PGA European Tour was requesting potential attendees to “register” their interest. Seven years in advance!

All of which is an indication of how much interest there is likely to be in the biennial match’s return to Ireland, for the first time since 2006, and of how it could even break the attendance record on this side of the Atlantic set in Paris last year when some 270,000 spectators attended Europe’s win over the United States at Le Golf National.

“Great news today adding to a great week for Irish golf,” tweeted British Open champion Shane Lowry – who’d actually spent the weekend ahead of his Royal Portrush masterclass in the hotel as a birthday present to his father, Brendan – of the confirmation, while 2014 Ryder Cup captain Paul McGinley, currently competing in the British Seniors Open, tweeted: “Congrats to the Irish government as well as Adare and JP in making this happen.”

Adare Manor is next year playing host to the latest edition of the JP McManus Invitational Pro-Am – with Tiger Woods, Dustin Johnson, Jon Rahm, Justin Rose, Rory McIlroy and Lowry among those committed to playing – and, although the DDF Irish Open is currently on a links rota, it is conceivable that the venue would also play host going forward for that European Tour event as a trial run ahead of the Ryder Cup.

“I am delighted that the prestigious Ryder Cup will return to Ireland,” said JP McManus. “Noreen and I are very happy Adare Manor was chosen. It is a wonderful tribute to the many great Irish golf ambassadors and success stories Ireland has had in golf over the years and a nice follow-on from Shane’s momentous Open win. The nation was behind Shane, it was a great achievement and very well deserved.

“I am confident the people of Ireland will get behind the Ryder Cup and take the opportunity to showcase Ireland on the world stage . . . . I hope the many tourist, golfing and business organisations will work together to identify all the opportunities for the benefit of the Ryder Cup tournament, the Irish economy and across the south-west community.”

Pádraig Harrington was earlier this year installed as Europe’s captain for the defence of the trophy at Whistling Straits in 2020, making him the third Irish captain since Paul McGinley became the first Irishman to take on the position at Gleneagles in 2014. Darren Clarke succeeded McGinley as captain for the match in Hazletine in 2016.

The captain for the match at Adare Manor is unlikely to be known until 2025 but, by then, a number of likely candidates – currently playing – are likely to include Henrik Stenson, Ian Poulter, Sergio Garcia and Graeme McDowell, who will be 47 at the time of the match.

Keith Pelley, the chief executive of the PGA European Tour, endorsed the confirmation in highlighting the huge successes of the recent Irish Open at Lahinch and the 148th Open at Royal Portrush. “I know such memorable scenes will be repeated in seven years’ time at Adare Manor. Ireland has golf in its DNA and especially in relation to the Ryder Cup,” said Pelley.

Much of the negotiations from the European Tour side were conducted by Guy Kinnings, who assumed the position of Ryder Cup director from Richard Hills, who retired after the match in Paris.

“Adare Manor is a world-class venue, both in terms of the golf course and the wider resort facilities. We could not be happier to be able to take golf’s greatest team contest back to Ireland . . . to showcase the next chapter in Ireland’s Ryder Cup story,” said Kinnings.