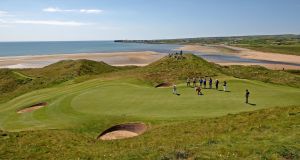 Royal Dublin’s Hugh Foley has had little luck in championship golf this year, but he’s hoping he can buck the trend and shake off the curse of the leading qualifier in the Pierse Motors VW South of Ireland Amateur Open Championship at Lahinch.

Strokeplay qualifying is in place for the sixth time in the 118-year history of the event and Foley is hoping to become the first leading qualifier to go all the way and lift the trophy.

“It was another good day,” said Foley, who tied for seventh in the Irish Amateur Open at Rosses Point but missed the cut in the West and North of Ireland Championships.

“I have to get rid of the curse of the leading qualifier now, but I will take this. I needed a positive result, so let’s see if I can play freely for the next few days .”

With a three-club wind gusting out of the south, Foley birdied the par-five fourth in a one-under-par outward nine.

He did well to limit the damage to a bogey six at the 12th where he lost a ball on the left from the tee, but made birdie with his second ball.

A chip-in eagle two at the 13th quickly put a smile on his face, and he finished with five successive pars.

“I was about 30 yards right and sitting quite nicely, and I was just trying to pop it up in the air onto the green,” he said of his two at the 13th. “I was short-sided, but it just took two hops and went in nicely.”

Thirty-four players broke par on the opening day, but just 13 dipped into the red yesterday. Galway’s Joe Lyons shot a best-of-the-day 68 to qualify with ease on level par while O’Mahoney posted a 69 to finish as Foley’s nearest rival on three-under.

Two-time runner-up Rowan Lester carded a 72 to finish in an eight-way tie for third on two-under. The cut for the top 59 who joined the exempt James Sugrue, Conor Purcell, John Murphy, Mark Power and defending champion Caolan Rafferty in the matchplay draw fell at five-over 149.