State will spend €50m preparing for and promoting 2026 Ryder Cup 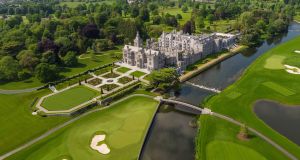 The State will spend €50 million preparing for and promoting the 2026 Ryder Cup, which will take place in Adare Manor in Co Limerick, the Minister for Transport and Sport Shane Ross has revealed.

Pressed by reporters in Glencolmcille, Co Donegal, during a break in a Cabinet meeting being held there on Thursday, Mr Ross said preparation of the resort and the course itself was a matter for the owner, billionaire JP McManus, but the total cost to the State was likely to be around €50 million.

Taoiseach Leo Varadkar stressed the tourism and economic benefits that the event would bring, and said the total yield to the economy would be over €100 million. “It’ll provide us with an opportunity to showcase the island from many different aspects.”

Mr Ross described it as “a great week for Irish sport”, citing Shane Lowry’s win at the Open in Portrush, Co Antrim, on Sunday, and the Ireland v England cricket match at Lord’s.

“Large numbers of golf tourists from Europe, the US and elsewhere will travel to the Ryder Cup in Ireland,” he said.

“Our research indicates that we can expect 300,000 spectators over the four days, 60,000 foreign tourists from 90 countries, a potential economic boost in the range of €90 million to €160 million in spending generated, a strong international profile boost potentially broadcast to 375 million homes, 5,000 hours of broadcasting on 50 different channels, 2,000 journalists, 73,000 articles about the Ryder Cup published, website and social media views and a tax take of between €13 million and €23 million.”

Junior Sports Minister Brendan Griffin described the Ryder Cup as “an enormous event on a global scale”, and said it was “a massive victory for rural Ireland”.

He praised the “huge work and dedication” of JP McManus for bringing the event to the Limerick venue.