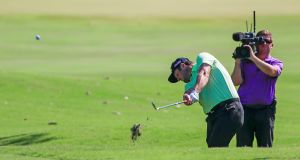 Jon Rahm of Spain hits on the ninth fairway during the first round of the World Golf Championships FedEx St Jude Invitational tournament at TPC Southwind in Memphis, Tennessee. Photograph: Tannen Maury/EPA

Irish Open champion Jon Rahm enjoyed a dream day with the putter and charged to a three-shot lead with an eight-under-par 62 in the first round of the WGC-St Jude Classic in Memphis on Thursday.

Rahm sank a bunch of medium-length putts in the 15-to-20-foot range, notching eight birdies at TPC Southwind, where he got up-and-down from 60 yards at his final hole to keep his card bogey-free.

Japan’s Hideki Matsuyama and American Bubba Watson were among a group of five players a distant equal second after shooting 65s in unusually mild conditions.

World number one Brooks Koepka overcame a double-bogey at the 11th and picked up birdie at the last for a 68, one stroke better than Rory McIlroy, who also finished strongly with four birdies in the final five holes.

Rahm said he had had no trouble adjusting to the quicker Southwind greens after the relatively slow putting surfaces at last week’s British Open.

He finished equal 11th at Royal Portrush, having won the Irish Open at Lahinch a fortnight previously.

“To me it’s always easier to adjust to quick greens than going to slow greens,” the world number eight told Golf Channel.

“This is completely different golf. You’re trying to hit the ball high, stop it quick. Over there in Ireland you’re trying to keep it closer to the ground.

“The biggest thing coming to here is adjusting to jet lag and making sure my body and mind were rested.”

Watson, like Rahm, also had a good day on the greens after reverting to the old putter he wielded to three victories last year.

“Today I was so calm and relaxed,” said the two-times Masters champion, who spoke of how his form was more dictated by his state of mind than his body.

“The physical is easy for me,” Watson said. “For me it’s all about mental. We’ve seen other athletes come out with mental problems and different things.

“This whole year I’ve been dealing with some stuff and just trying to get better at it.”

McIlroy, meanwhile, bounced back from the disappointment of missing the cut in his home Open at Portrush, even if he dropped four shots in four holes from the ninth.

“I lost my swing in the middle of the round, started missing shots left,” he said.

“I hit a really good tee shot on 14 and that turned things around for me and I made some good swings coming home.”

An elite 63-man field is contesting the World Golf Championships event, which has replaced the old regular full-field PGA Tour event held on the same course until last year.

Tiger Woods and British Open champion Shane Lowry were among a handful of eligible players who decided to skip the tournament.