Harrington and McGinley just off the pace at Dunhill Links 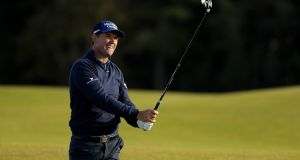 Ireland’s Pádraig Harrington plays his second shot to the ninth during day one of the Alfred Dunhill Links Championship at Kingsbarns. Photograpgh: Richard Heathcote/Getty Images

Australia’s Marcus Fraser survived “brutal” conditions to claim a share of the lead with England’s Matt Wallace after the first round of the Alfred Dunhill Links Championship in Scotland on Thursday.

On a day when strong winds made scoring difficult and only 24 players in the 168-strong field broke par, Fraser carded a four-under 68 at Carnoustie, traditionally the hardest of the three courses used for the pro-am event on the European Tour.

Wallace, who missed out on a Ryder Cup wild card despite three wins this season, including the final qualifying event in front of Europe captain Thomas Bjorn, compiled his 68 on the Old Course at St Andrews.

Former Ryder Cup captain Paul McGinley and fellow Irishman Pádraig Harrington, who is favourite to follow in Bjorn’s footsteps in 2020, both shot 69 at Kingsbarns to lie a shot off the lead alongside Phachara Khongwatmai, Jinho Choi and Matthias Schwab.

Defending champion Tyrrell Hatton, who is seeking a third straight win in the event, is a shot further back on two under alongside reigning US Open and US PGA champion Brooks Koepka.

Hatton’s Ryder Cup team-mate Tommy Fleetwood recovered from a poor start to play his last eight holes at Kingsbarns in four under par to record an opening 71. Tony Finau, who beat Fleetwood in the singles in the Ryder Cup on Sunday, carded a 73 at the same venue.

Fraser, who carded five birdies and one bogey at this year’s British Open venue of Carnoustie, told Sky Sports: “It’s brutal out there. It’s probably the toughest wind I’ve played this course in today. It was nice to play pretty steady and hole a few putts.

“Downwind was just as hard as into the wind, it was really tricky to control it and try to get the right distances. We were out by probably 20-30 yards some times but it just can’t be helped. You get a firm bounce and it just takes off.

“And the cross breezes as well down those last two holes, the ball just drops out of the air and doesn’t fly. It’s hard to gauge but I felt like I did a really good job of it today.”

Harrington on his first Major title at Carnoustie but he was happy to get his tournament underway at Kingsbarns.

Level-par for his front nine after starting from the 10th hole, Harrington picked up three birdies on the way home.

“I hit my irons really well pretty much through most of the round, I hit it pin-high a lot, which in the wind is obviously difficult, so I really wasn’t in trouble very much,” said Harrington.

“ I missed a tap-in on 16, I was trying to tap it in and missed it from from less a foot. That softened my cough a little bit and it didn’t make any of the short putts easier after that, two and three foot was looking very long later on in the round.

“[It was a] Pity to three-putt the last, a couple of missed opportunities, first hole as well, I hit a lovely shot in but I got the wind wrong and hit it clean over the green. So it was awkward like that.

Also starting from the 10th, McGinley was three under after eight holes after back-to-back birdies on the 16th and 17th, but he handed those gains back with bogeys on the 18th and first to slip back to one under. He would get back to three under by the close of the day, with birdies on the third and sixth holes.

Shane Lowry carded a level-par 72 at Kingsbarns, but Graeme McDowell dropped six shots in his first six holes in an opening nine of 42 shots as he carded a five-over 77. Paul Dunne closed with a triple-bogey seven at Kingsbarns in his 78.

Michael Hoey and Robin Dawson both opened with two-over-par rounds of 74 at St Andrews.

1 Six Nations: Ireland are contenders but England still the team to beat
2 Owen Doyle: Creeping professionalism of schools rugby a threat to the game
3 Mike Catt hopes to have Irish backs purring in Six Nations
4 In Donegal Michael Murphy is seen, simply, as a godsend
5 The world spins but it’s soon back to Dublin and Kerry
Real news has value SUBSCRIBE