Cups and Shields: Nenagh preparations pay off in the Pierce Purcell Shield 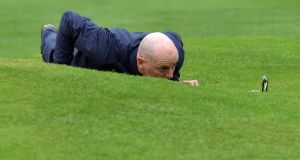 Ian Holmes (Athlone) lining up his putt on the 13th green in the semi final of the Pierce Purcell Shield at the 2018 AIG Cups and Shields Finals at Thurles Golf Club today (04/10/2018). Picture by Pat Cashman

Two-time US Masters champion Ben Crenshaw once observed that “as a golfer you feel like you are perpetually on the rack in foursomes. Mentally it’s very difficult.”

That’s a statement with which Barton Shield players might identify in the normal course of events but it certainly wasn’t the case for the golfers of Dundalk and Athenry who dominated their respective semi-finals in the AIG All-Ireland Cups & Shields at Thurles Golf Club.

Dundalk’s Caolan Rafferty and Eoin Murphy, five up at the time, were called aside as they walked to the par-three 14th to inform them that with their teammates, Aaron Grant and Conor Curran, enjoyed an identical advantage, which meant that opponents Kinsale had run out of holes to overturn the deficit.

The 25-year-old Irish international Rafferty became the first Dundalk player to win the South of Ireland Championship in July. Alongside his playing partner Murphy, who caddied for him in the semi-finals and finals en route to claiming the title in Lahinch, they enjoy a harmonious relationship, first and foremost as friends. It helps to partially assuage the stress of the alternate shot format.

Rafferty admitted: “It’s a hard game [in which] to gel at the best of times but if you are playing for your best mate it’s so easy to do it; a laugh and a joke and you can slag each other at times when you know it is appropriate.”

Murphy, the 18-year-old Ireland Boys international, summed up the essence of their victory.

“We struggled for the first six holes, couldn’t get any putts to go in and then got a good break on seven to get up and down. We kicked on, two nice birdies on eight and nine to get comfortable and then it was just a matter of hitting fairways and greens and keeping it tidy from there on in.”

Grant and Curran were equally authoritative in the top match and Dundalk’s ascendancy meant that they were in plenty of time for a scheduled visit to the Coolmore Stud in the afternoon. Athenry will provide formidable opposition having eased past Clandeboye and will be delighted to have progressed further than their previous best performances in the Barton Shield, losing All-Ireland semi-finals in 2011 and 2014.

Darren Leufer, deputising for David Kitt, who is representing Ireland in the Youth Olympics in Buenos Aires, partnered current Boys international Allan Hill to a two-hole victory. They will face Dundalk’s unbeaten pair of Rafferty and Murphy in the final. Hill said: “It’s great to back. There’s been a lot of hard work from the lads on the squad. I know the two [Dundalk] lads well; we get on great so I look forward to it.”

Nenagh captain Paddy Peters explained that a little reconnaissance and a match play culture in the club underpinned their success over Newbridge.

“Thurles has been very good to us. They put a few lads together and invited us over for a practice match, which was a great help. And they gave us information about the places to come in from and how to play the course.

“We have just two lads from the team that won in 2016, David Hickey and Pat J Hogan. Most of them are playing the Jimmy Bruen this year and this year’s team will be playing the Bruen next year. We have no kids on the team. The youngest is in his 30s and Pat Ryan, who is 74, was out in the third match.

“Some of the lads have played the course five or six times by coming here for the Open days and made use of it that way. It’s very seldom you get an opportunity like this with the club next door hosting the All Irelands. We beat Thurles in the Munster semi-final and they were disappointed. They would love to have been in the All-Ireland at home.”

Nenagh face Athlone in the final with the Connacht champions edging past Ballyclare, the bottom match effectively deciding the result at the first tie hole with the first four points were shared.