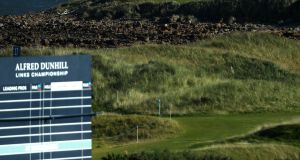 How it works: Over the course of four rounds, two competitions will run side by side. Each professional will be paired with an amateur for the duration of the tournament, with players alternating between the three different courses. The pros will compete in an individual strokeplay event as normal, but will also be part of a Pro-Am competition involving their partner, with the best score on each hole from every pair taken. After three rounds the field is reduced to 60 pros including ties, plus the leading 20 Pro-Am teams, with the final round being played at the Old Course.

The field: Two members of Europe’s victorious Ryder Cup team are among the 168 players who will tee it up on Scotland’s east coast with Tommy Fleetwood and Tyrell Hatton taking their places in the field. Hatton loves the courses and format and will be going for his third Dunhill title in a row, a feat never achieved before. The defeated American Ryder Cuppers are represented by Tony Finau and Brooks Koepka, who will be looking forward to concentrating on his golf again after a trying week away from the course. European vice-captains Luke Donald, Pádraig Harrington, Robert Karlsson and Graeme McDowell will all compete.