Game Changers: Gary Player made physical and mental discipline the norm in golf 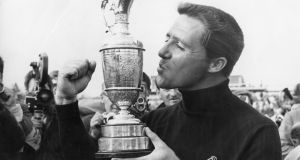 Gary Player kisses the British Open trophy, which he won for the second time at Carnoustie in 1968. He is one of only five golfers to have won all four Majors. Photograph: Central Press/Getty Images)

The way Gary Player tells it, air travel back in his early professional career was far removed from modern-day comforts.

Remember, this was long before players had private jets or the concept of NetJets ever existed: “It took me 40 hours, stopping four times . . . I can remember washing my children’s crappy nappies in the toilet and rinsing them out and putting them back on. So, it was a different time.”

If that little story only serves to show that Player was actually a hands-on father, it also provides an insight into how the crossing of international timelines were required in his efforts to impact globally.

Indeed, as the only non-American to claim golf’s modern “Grand Slam” – of Masters, US Open, US PGA and British Open championships – Player also earned the reputation over his career as the most travelled athlete in the world, notching up in excess of 15 million air miles.

What separated Player from the other members of what became known as “The Big Three” of golf was not that he was South African, while Arnold Palmer and Jack Nicklaus were American, or the vast amount of international travel required of him, rather it was his approach to fitness and diet which, as someone of 5ft6in, became an integral part of his success.

Player was a gym bunny long before it was en vogue, his pursuit of physical strength allied with a thirst for mental wellbeing ahead of its time on tour.

“Sleep was a very important thing for me. But I would get up and always I would do quite a bit of meditation. I would also sit in front of the mirror in a tai chi position and think about the things that were going to happen that day; that you’re going to have adversity whether you like it or not . . . I went through my rigmarole, which is quite complicated. Then I always had a cold shower to start with, and then I had a hot shower to get blood circulation. And I didn’t overeat. I made sure I ate sensibly which was in my mind sensibly but in many people’s minds it wouldn’t be. I prepared in a different way.”

In effect, Player did things his way; yet he was ahead of his time, and that physical and mental discipline which he so faithfully avowed – in a career that saw him win nine Majors and a total of 163 tournaments worldwide – has, with only a few exceptions, become part and parcel of the whole professional scene these days. At the age of 84, Player is still capable of doing a thousand push-ups a day and pushing 300lbs in weights with his legs.

“My dream to fulfil is to get a message to the young people in the world that your body is a holy temple and if you want to be productive, you want to be happy, you want to do something for your country and contribute to society, you’ve got to be in shape. So exercise and education, it’s my dream to get across and that’s why I do it.”

There’s even photographic evidence of how well Player managed to keep in shape, long after his playing career required such physical discipline: in 2013, he became the oldest athlete ever to pose nude for ESPN’s The Magazine’s annual body issue. He felt, by doing so, he would inspire people to look after their bodies regardless of their age.

Player may not have been the greatest player of his era – that hat tip unquestionably goes to Nicklaus – but he got the most out of his body and his game, and when it came to practice there was no one who spent more time, in that old philosophy of Ben Hogan, of hitting it out of the dirt.

“I’m a workaholic at golf and, in humility and sincerity, this pair of hands hit more balls than any man who ever lived, because I was an animal at hitting balls,” remarked Player of his work ethic on the range.

Of all those playing in the 1950s and 60s and onwards, it was Player – from Johannesburg – who expanded his horizons. To become a great, he knew he had to travel. Be it to Europe, or to Australia (where he won six Australian Opens) but mainly to the United States at a time when long-haul travelling was not easy.

Player would actually reach the milestone of joining Gene Sarazen and Ben Hogan as a “Grand Slam” winner ahead of Nicklaus, while Arnie – the self-styled “King” – never made it into that elite group which would in time extend to also include Nicklaus and Tiger Woods. Only five in all, and Player the only non-American.

Although he won nine career Majors, Player’s route to the Grand Slam proved to be remarkably straight forward in that he ticked off one box after another: firstly, the British Open in 1959; followed by the Masters in 1961; then the US PGA in 1962 and, finally, completed the cherished set with a US Open triumph at Bellerive in 1965. His first four Major wins brought him to the most exclusive club in the sport.

He became a multiple winner of the Masters, PGA and the British Open (the only player to lift the Claret Jug in three different decades in the 20th century), but his one and only US Open came after an 18-hole play-off win over the Australian Kel Nagle at Bellerive Country Club in St Louis. What Player did on winning though, demonstrated his charitable leanings: he immediately donated the entire $25,000 cheque towards cancer research and junior golf.

That donation was the first act of a philanthropic leaning that would lead to the setting up of the Player Foundation, which in time has donated in excess of $65 million to mainly children’s charities and also wildlife conservation, in South Africa and internationally.

But there was a darker side too, that of apartheid in his homeland. At one time, he was a supporter of the policy; over time, he became one of its strongest opponents.

The transformation, though, was a slow process. In a 1966 book Grand Slam about his four Major wins, Player supported the apartheid policies of South African prime minister Hendrik Verwoerd, describing how the country and apartheid “is the product of its instinct and ability to maintain civilised values and standards amongst the alien barbarians. The African may well believe in witchcraft and primitive magic, practice ritual murder and polygamy; his wealth is in cattle”.

That view changed dramatically, with Player claiming he and others like him were “brainwashed” and that international travel opened his eyes and helped his conversion. Player – who has Nelson Mandela and Sister Theresa among those he most admired – campaigned against the policy in the 1980s and into the 90s.

“I think it’s terrible. It’s almost a cancerous disease . . . we’ve got to get rid of this apartheid!”

Where once he was a target of anti-apartheid protestors, Player became an avowed critic of the regime. In a 1993 interview with the Los Angeles Times, he stated: “I can’t tell you when it happened. But suddenly I realised it wasn’t right and the government wasn’t telling us the truth. They were pulling the wool over our eyes.”

Player’s impact on golf extended beyond his title wins to influence golf course design – with some 400 projects on five continents – and philanthropy, which earned him honorary doctorates from the University of St Andrews (Law) and the University of Ulster (Science).

As for that Black Knight moniker?

Well, that actually derived, would you believe, from his love of westerns where traditionally the good guy wore white. Except, two of his favourites, Hopalong Cassidy – “the epitome of gallantry and fair play” – wore black, as did the character Paladin from the television western series Have Gun, Will Travel.

Paladin was a gentleman gunfighter, a well-heeled, world-traveller, who left a chess knight symbol as his calling card. It was from there that the whole Black Knight symbolism of Player developed, a brand which, typically, he made his own.