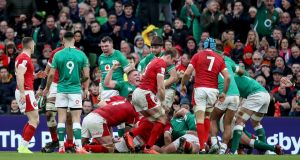 The Six Nations unions appear to be unaware of the restless, even revolutionary mood that is rumbling across the rugby world.

The fact that World Rugby is using its political might to bring about a united global calendar should signal a huge warning to the Six Nations. The war drums outside of Europe’s old guard are beating loudly.

At this stage, the sky is falling in and the crowd scream: ‘They want to change the Six Nations Championship!’

An aligned world playing calendar is not a plot to kill off the Six Nations so put that argument in the waste paper basket, where it belongs.

In rugby’s first revolution in 1995, the game became part of the entertainment industry. This fact still remains unnoticed by the vast majority of players and administrators in the north.

This pandemic has forced even the most conservative of rugby minds to realise that the business models for professional rugby created in 1995 simply will not work in the future. Rugby must find new revenue streams.

To put it simply, rugby as a global sport has to find new markets and entertain new audiences, especially in the Americas and Asia. The Six Nations Championship, the Bledisloe Cup, Lions tours and other great traditional rugby rivalries are valuable products that must be sold to new audiences.

The hard part is making rugby more accessible and easier to understand for these huge markets. This requires change, which is not something rugby excels at.

Rugby as a spectator sport is currently burdened with an overly complex set of ever expanding laws, that force officials to stop the play and the entertainment with endless penalties.

The game has also become infested with infuriatingly negative rushing defensive systems. This means that running the ball - the entertaining part of the game that we can sell and make money out of - has become increasingly rare.

Currently, the game is full of the endless tedium of repeated box kicking and three minute scrums that result in a penalty. This penalty is then kicked into touch so a maul can be set up from the lineout. Backline attack from set play has all but vanished.

Add to this to the many time wasting penalty shots at goal which have replaced scoring tries as the main source of accumulating points and you can see there has been a fundamental swing in the game towards time wasting and negative play.

If World Rugby fails to deliver an aligned global season and meaningful changes to the laws of the game, then the seeds to rugby’s second revolution will still have been sown.

Outside of the Six Nations, the demand for change is overwhelming.

It is not reckless youths protesting for change, but the wisdom of former greats. A group of highly respected Australian rugby elders, men who have ‘been there and done that,’ have released a challenging series of detailed YouTube presentations, aptly entitled “Rugby Can Change.”

They also have provided provocative recommendations on how to bring back running rugby to entertain and attract new audiences.

The production quality of these presentations is not high, but the information they provide is provoking, shocking and stimulating. This is a deep technical plunge into the drastic amount of time lost in matches on scrums, mauls and penalty kicks at goal.

They also document the slow castration of backline attack.

Scrums provide the best attacking platform in the game. At the Rugby World Cup of 2003 there were 30 tries scored by backlines from scrums. By the RWC of 2015 the number had almost halved to 15.

Teams now scrummage for penalties. Then kick to the corner. Set up a lineout and maul for a try scored by the hooker. The horrid evidence of this truth is that in today’s game a hooker is now 2.5 times more likely to score at try than a centre.

The elders lament that, in the words of the great French coaching genius, Pierre Villepreux, “We spend too much time coaching backs to be like forwards. We should be coaching forwards to be like backs.”

These elders, wisely call for a return to rugby’s founding charter. This states that rugby should be played “…in a sporting spirit, by carrying, passing, kicking and grounding the ball, scoring as many points as possible.” It is clear in this charter that the object of the game is to score tries. Kicking refers to kicks in general play, not shots at goal. The charter, the elders note, says nothing about pushing in three minute scrums.

To grow rugby into the hugely lucrative markets of America and Asia is essential for the survival of the professional game. If the Six Nations think that playing rugby in summer is the revolution, they are a long way behind the curve and out of touch with the reality of the rest of the rugby world.