Golf ready for biggest rule changes ‘in a generation’ 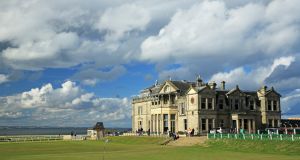 A view of the clubhouse of the Royal and Ancient Golf Club of St Andrews. Photo: David Cannon/Getty Images

A “player’s edition” of the rules of golf has been launched for the first time ahead of several changes which will come into force from 2019.

Both free and penalty drops will be taken from knee rather than shoulder height in order to increase the chances of the ball remaining within the relief area, while there will no longer be penalties for moving a ball while searching for it or accidentally moving a ball or marker on the putting green.

The player’s edition of golf’s rules has been introduced to provide a user-friendly version for golfers at all levels of the sport and will include diagrams, simplified language and explanations of the purpose of each rule.

The changes — which were also designed to improve the pace of play — were unveiled by the game’s joint rule makers, the R&A and the United States Golf Association, and will come into effect on January 1st.

David Rickman, the R&A’s executive director of governance, said: “We are delighted to be rolling out the modernised rules of golf.

“This is the biggest set of changes to the rules in a generation and a major step forward in our efforts to make the rules, and golf itself, more accessible and more in tune with the way the modern sport is played.”