Even Serena Williams can on occasion be wrong

Serena Williams has accused an umpire of sexism and treating her more harshly than men after an on-court tirade at the official during her United States Open final defeat to Japan's Naomi Osaka. Video: USTA/ESPN/TSN 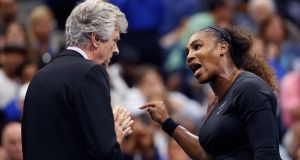 Serena Williams deep in conversation with referee Brian Earley during the women’s final of the US Open against Naomi Osaka, of Japan. Photograph: Adam Hunger/AP

What are we supposed to think about Serena Williams? Up until a few years ago this seemed a question so blindingly straightforward as to make you look silly even asking.

She was, is, one of the world’s great athletes, an epochal figure in her sport. And a story that even the most creative mind would have struggled to come up with had she not saved everyone the bother.

Sport-wise most of us live sheltered lives. You have the sports you live and die for, then the ones you are sort of half into, then the ones that only really exist to you three or four times a year, then the rest.

For this column tennis vacillates between the latter two categories. Got nothing against it but wouldn’t be moving mountains to get to see a match. Would watch plenty of the Grand Slams if there was nothing else to be at but freely cop to seeing zero minutes of Wimbledon in a World Cup year.

Williams exists beyond all that. She is an Eiffel above the tennis cityscape. In the general consciousness she has long since outgrown the sport. You don’t need to know her world ranking to know who the number one female tennis player in the world is.

When you live that sort of arm’s-length life from something, you will occasionally find yourself surprised by it. The idea that Serena Williams would or could ever feel underrated or disrespected in tennis – in tennis! – felt like such a nonsense concept the first time I came across it. She was just so all dominant, so obviously in a different league to everything else in the sport. It made about as much sense as disrespecting the Pacific.

Again, though, that’s the comfortable view from the sheltered life. When someone’s backstory is famous – as the Williams sisters’ rise from Compton to kick up the cossetted world of tennis instantly was – you very quickly become inured to it. Instinctively you know that Williams had to fight through a world of extraneous bullshit just to get on to a level footing with the rest of her sport but eventually you shrug and forget it and just watch her play. And when she’s playing everything else dissolves.

But of course all the years of slights and taunts and racism (casual and otherwise) and sexism (ditto) are poured into the mix of who she is. And of course that’s going to inform the tennis player she is and the personality she is. Every once in a while she jolts casual sports watchers out of our complacency by setting free the great vengeance and furious anger routine. And suddenly it’s not so easy to be on her side.

This isn’t just about Saturday night. The row between her and umpire Carlos Ramos during the US Open final could have been ended by either one of them at any time and neither came out of it looking good. At the back of it, though, Williams had more to lose than a finicky umpire was ever going to have – calling him a thief for the whole world to hear was a fatal loss of control at a point in the match where she couldn’t afford it. She had to know there was a danger he could react the way he did.

But anyone can lose their temper. You wouldn’t hold that against her. If you did, you would be holding her to a standard that isn’t applied to everyone else and that would obviously be wrong. It shouldn’t need saying that Serena Williams ought to have every bit the right to lose her rag that every other sportsperson on earth has – male or female, black or white, best in the world or just another player. Doesn’t mean she’s always right to do so, however.

Maybe there’s no way to come up through life the way she did and not see prejudice in every call that goes against you. It’s entirely understandable if this is purely ingrained, this idea that as a woman of colour you had to be twice as good to get half as far and that you’re always facing a foe with their thumb on the scale. And it’s probably an egregious loss of perspective for the mostly white, mostly monied, majority male audience to tut-tut their disapproval on the occasions she paints outside the lines.

But it’s equally true that for those of us watching from afar, there are times when Williams comes across as petty and self-involved to a wearying extent. Her complaints during the summer about the level of drug testing she has to endure are a case in point. Tweeting out an oh-so-innocent “discrimination?” claim just made you want to roll your eyes.

Serena Williams is in the twilight of her career. She had just recently returned to the sport after an absence to have her daughter. She is a serial winner. She has in the past locked herself in her panic room and called 911 when testers have called to her front door. She has had a backdated TUE [therapeutic use exemption] – all above board and legal, not that she likes being asked about it. She has complained numerous times about being tested. She has no room to claim discrimination when testers take all those different strands into account.

When she does so, it tests your inclination to take her side when actual discrimination rears its head. The frankly creepy diktat that was handed down to stop her wearing her catsuit in the French Open was appalling. Combined with the code violation handed down to French player Alize Cornet earlier in the US Open for fixing her back-to-front top on court, it speaks of a sport with a desperately unhealthy attitude to women’s bodies. It’s yet another layer of obstacle no male player ever has to deal with.

No doubt, all that feeds into what happened on Saturday night. Maybe that umpire did react to Williams in a way he wouldn’t have had a Djokovic or a Nadal behaved the same way. One way or the other, Williams clearly felt it was the case. But we have no way of knowing whether he made a sexist decision, just as she has no grounds for calling him a thief.

You can also be wrong sometimes.